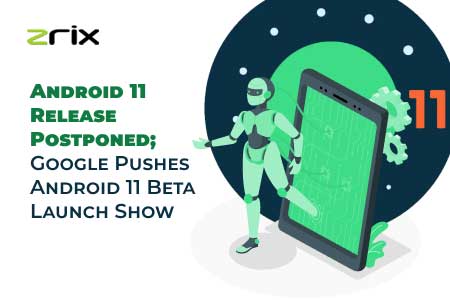 With Android 10, we get dark mode (night mode), many app permission changes, and marked Google's name with a new Android logo/brand.

Android 10 is a mature operating system that is now being carried to Android 11, the latest Android version.

In a world where COVID-19 is leading to cancel every single launch, expos, etc., the Android 11 beta release is also getting continuously postponed from the last many weeks.

According to the official sources of www.android.com,

In February, Google announced the first Android 11 Developer Preview. And it was released earlier than everyone expected. The early release was for the developers so that they can understand and adopt new apps, APIs, and platform behaviors.

The main reason behind the delay of the Android 11 beta release is the COVID-19 pandemic; otherwise, Google would have launched the update Android version, the first Android 11 Beta at Google I/O event that was dated from May 12th-14th.

COVID-19 has not only impacted the Android 11 release timeline but impacted many other tech giants conferences, expos, fairs, etc. Therefore, Google decided to push the release of the first Android 11 Beta.

The delay in Android 11 has caused many of the top Android app development company in USA to change their plans and return back to Android 10!

It was expected the first beta will be revealed on June 3rd, 2020 in an online event. Already Google is done with releasing 3 Developer Previews!

And the plan was to release Beta 1, then after Android 11 Developers Preview. However, now to fill the gaps between DP and Beta release, Google will launch DP 4.

Google titled June's online event as “#Android 11: The Beta Launch Show.” But, now in the event, you will get Developer Preview!

Furthermore, Google will also open up the Play Store for the developers to submit new apps based on the new Android version, Android 11.

Hire Android apps developers in USA and make the best apps based on new Android 11!

It will be amazing to see how Google will launch the DP 4 (Developer Preview 4) while delaying the release of Android Beta 1.

“It is now expected that the current version of Android 11 will release in June, Beta 2 in July, Beta 3 in August, and Beta 4 in October or after it!”

In the postponed event, Google was going to host webinars followed by a series of online talks to cover the rest of the topics at Google I/O 2020.

Following the post-show, a Q&A session related to Android Studio and Google Play was also going to happen after the announcement launch.

But for now, everything seems difficult due to ongoing world events due to the Coronavirus pandemic and the protests in America.

According to sources, Google was all set to launch the Android 11 version online but postponed it only due to ongoing protests on the death of black man George Floyd in the United States.

Also Read: Android vs iPhone - Which Smartphone You Should Buy?

As a result, Google delayed the Android 11 beta launch because several US cities are under protests due to the death of George Floyd in Minnesota.

The current conditions in USA are on the thin line; first, due to Coronavirus and then due to these protests. Otherwise, Google would have surely celebrated the Android 11 release worldwide!

Some of the key focus areas of Android 11 are:

“One more thing is expected, i.e., Google can launch the most awaited Google Pixel 5a alongside Android 11.”

However, looking at the acts of violence that are taking place, it is quite unsure when Google will launch Android 11.

Looking at the current scenarios, world events, and political unrest,

"It is not the time to celebrate Android 11 Release!"

As Google has canceled its annual developer conference — Google I/O 2020, the big Android release will be done via live streaming online.

The company is going to live stream the Android 11 Beta launch on June 3.

Also Read: 10 Features Of Android 10 That Will Transform Your Phone

It will be a long online session, where new Android 11 features will be discussed by the developers and for the developers/.users.

Furthermore, Google will publish the below 12 “binge-worthy” topics covering everything about Android 11. Following are the topics of discussion:

You can find out the latest information about every exciting feature of Android 11 on Android's official website.

Tweet us at ( @cmswebsiteLLC ) on your Android questions, doubts with the hashtag #AskAndroid.

Get the latest Android updates from the top custom mobile app development services provider in USA!