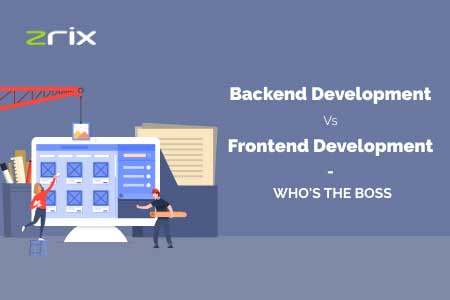 Are you interested in web development services provider company? Do you understand your career goals with coding and programming languages? Are you confused about development choices such as frontend vs backend development?

If answers to all these questions are a tricky task to you, then you indeed came to the right place. Maybe you have decided to learn frontend and backend development, but have no idea about the programming languages.

In this case, we will make your all doubts clear and will tell you the difference between frontend vs backend web development. Otherwise, if not, then how about choosing a career path in full-stack development?

While frontend and backend development varies from each other, they belong to the same purpose, i.e., creating websites, applications, software, and more.

In this article, we are going to tell you the basics of frontend and backend development. The subject matter below will probably clear your all doubts regarding frontend vs backend developer.

What Is Frontend Development?

Front end development on the website manages everything which we see visually on our browser. And frontend developers of a website are responsible for giving look and feel to a site.

It is mostly focussed on the "client-side" of development. Frontend developers engage themselves in analyzing code, designing, and applications debugging to ensure a seamless user experience.

As a frontend developer, you have to manage what people see in their browsers. Thus, you imagine and design the website.

What Is Backend Development?

Backend development on the website refers to the server-side where communication is established between the database and browser.

In backend development, you primarily focus on the site working. Adding and updating functionality to the website is the backend developer’s responsibility.

In this development, a server, an application, and a database are connected, and via code, communication is established. To be a good backend developer, you need to become a learned programmer.

Thus, first, identify your responsibility that what kind of web development services provider

Programming Languages In The Web Development

Frontend languages include HTML, CSS, and Javascript. Though JQuery is going out of style, many projects still use JavaScript library. However, modern browsers can perform the same work more quickly without jQuery; thus, we haven’t counted it in the programming languages used for frontend development.

In frontend development, you also have to learn about responsive designing, typography, website layouts, website grid system, and color schemes. As a frontend developer, your first role will always be to think creatively and redesign the websites.

A frontend developer sometimes is called a JavaScript developer. Moreover, you don’t need any backend development skills. Additionally, sites created by frontend developers never interacts with information on databases, the content is fixed, and is not functional.

A website made by a frontend developer is better known as the Static website. In order to make a site more functional, you need backend development.

Many back end developers are masters in HTML and CSS, which are frontend languages. However, languages like Java, PHP, Ruby on Rails, Python, and .Net can get the backend job done efficiently.

Back end developers are always focused on a site’s functionality and speed. Such languages create dynamic websites that store database information.

Moreover, it is easy to change and update the content regularly. Examples of dynamic sites where backend development is included are Facebook, Twitter, and Google Maps.

NOTE: If you aren’t in a mood to learn these backends vs frontend programming languages, then we can offer you a better option, i.e., CMS - Content Management Systems!

Have you ever heard about the WordPress development services that make beautiful websites just by customization?

You get all premade designs, website layouts, plugins, and widgets! You only have to arrange them all and can make your website ready in hours.

Although the frontend development deals with the visual and interactive side of a website, it is entirely different from web designing. The frontend developers don’t design facial aspects of the website, but they take this design and make it functional.

On the other hand, giving facial aspects to a website is the job of a web designer or a UI designer. Therefore, web designers are more or less concerned with the design, look, and feel of the website.

But the touchpoint and interaction experiences are mainly given by the frontend developer. If the frontend isn’t attached to the servers, then how servers perform for the website?

To understand this, you will have to read out the next section of this article;

A website needs a database that manages all the online visitors, customers, and product information. Basically, the job of a database is to store website content in a smooth and structured way such that retrieving, organizing, editing, and saving data is easy.

This whole setup runs on a remote computer, which we call as a server. There are different types of databases, like MySQL, SQL Server, PostgresSQL, and Oracle. Each of them is famous and widely used.

If the data, servers, and websites, everything works well together, then only the people can visit your site over the internet. Hence, to make your site live, you need databases and servers.

Additionally, to establish contact between them, all you need are backend developers having knowledge of servers and networks.

The best example to understand backend and frontend web development is by working in an eCommerce solutions provider company. Otherwise, you can start creating your own eCommerce website using the above-mentioned programming languages.

In the case of frontend development jobs, the average base pay is about $63k. The salary can range from $50k - $100k based upon your skills, project work, and requirement of the custom software development company in Raleigh, NC, USA. The average annual income of a frontend developer is $118k.

Note: The above data is based upon the US (or American figures)!

Should I Learn Frontend Or Backend Development, Or Both?

You already have got useful information of frontend vs backend development. When I was a dedicated web developer in USA considering the day-to-day tasks in development, I was enjoying an excellent job cycle as a frontend developer.

But, you know the excellence comes when you run behind knowledge. Thus, to perfect my development skills, I indulged myself in backend development learning; today, I proudly call myself a full-stack developer providing web and app development services.

I mean to say, a developer having all the skills to create an entire application will always be more valuable than a developer with half-knowledge of the working of the application.

My recommendation is to become more versatile in development and go for a full-stack career on web development!