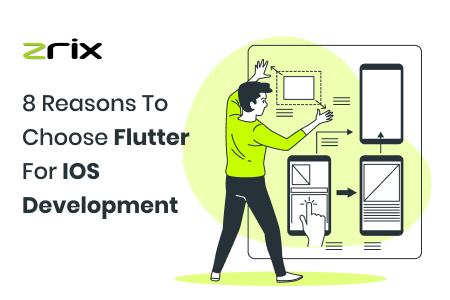 Flutter, a mobile UI framework is an open-source technology that allows you to create iOS and Android apps with a single codebase. Flutter isn't a framework in the traditional sense. Instead, it's a complete Software Development Kit that includes all of the necessary components to build cross-platform software.

Widgets, command-line tools, integration, testing APIs, and a rendering engine are all included. Furthermore, Flutter includes a reactive development framework that refreshes the UI components in response to changes in the code variables.

This principle can also be found in React Native. It does, however, javascript based framework to access ready-made widgets, which may cause performance issues.

This isn't an issue with Flutter because it communicates with a native platform via Dart. Furthermore, UI components and programming language is the best for quickly compiling native code.

Furthermore, Google published Flutter a few months ago, which is compatible with Android Q. On the Chrome OS, professional developers and programmers may now design Flutter mobile apps.

You'll also have the opportunity to publish new Flutter apps for Chrome OS as one of the entrepreneurs.

8 Reasons to why Choose to Flutter for iOS development

Here are the 8 best reasons to choose Flutter for iOS development.

In terms of performance and quality, native apps are the finest. Developers, on the other hand, must write distinct codes for different mobile platforms to create these apps. As a result, the app development process would be lengthy and costly.

As a result, Flutter, cross-platform app development, has been picked by iOS and Android app development companies. Mobile app developers can use Flutter to come up with new ways to write code.

Furthermore, this technology aids developers in the creation of high-quality, dependable mobile apps that run on any platform.

The process of developing an app has grown more efficient

Developers used to take a month to create an app a few years ago. However, now that they've started utilizing Flutter, they'll be able to complete their assignment in a matter of weeks or days.

You must rely on Flutter development services due to the speedier application development process. Flutter has also made it easier for developers and designers to collaborate. The app design is imagined by the design team, and the skilled developers work to make the concept a reality.

There is no danger of conflict because these developers and designers work together. They can provide feedback on the app's development using android development software. As a result, you will receive the best product on time.

Hot Reload is one of Flutter's capabilities for reducing app development time. A Flutter iOS app developer can make changes to their coding output in real-time. As a result, a group of developers can skip reloading. This function is beneficial to both businesses and managers.

Flutter is a simple programming language for iOS app developers

You're probably aware that Flutter is tied to Dart, Google's single-source programming language. As a result, even developers with limited programming experience may learn Flutter. Because Dart includes a reactive framework, many app developers opt to use it to design their apps.

Furthermore, both backend and frontend development becomes much easier to manage in this platform. Apart from being a mobile app development platform, Dart can also be used to create desktop and online applications.
Flutter is also comparable to C in that it is an object-oriented language. As a result, Dart is simple to work with for dedicated iOS developers

Nobody would utilize a mobile app that took a long time to load. Flutter was chosen by developers to construct feature-rich and functional apps to avoid this problem.

The faster performance of these Flutter mobile apps can be found. Furthermore, the creators of Flutter technology have made every effort to create a quicker Renderer that can render at a higher FPS.

Flutter also offers top-notch performance thanks to its usage of the Dart programming language. For various scrolling applications, the silver layout model, which refers to the Flutter layout, works quite quickly. As a result, you can use Flutter apps for your business.

Your app's User Interface will be animated and beautiful

Flutter has a lot of advantages, one of which is the ability to customize anything on your screen. Flutter's customizable feature allows you to create stunning apps with a pleasing user interface. Even though you may want a complex user interface, Flutter is the appropriate pick.

Furthermore, Flutter's customizable widgets can make the app development process more versatile. Material Design and Cupertino are two widgets that can give your app a more natural and authentic design.

Also Read: How To Choose the right database for your Flutter app

Flutter also has platform-specific functionality and scrolling, as well as a responsive framework with rich fonts. The developers can use this to build an intuitive app interface for your apps.

There is no need to be concerned about app testing

You are familiar with the complexity of app testing procedures because you have worked on the coding process. Quality assurance of your apps takes a long time for app developers. However, because there is just one codebase for two platforms, the testing process is sped up.

There is a large library with excellent documentation

One of the benefits of having a large Flutter library is that it makes it easier to add features to your project. A programmer's development process has also been made easier by the best documentation with every feature and functionality.

Google's Fuchsia OS will be released, and the most remarkable feature of Fuchsia is that it allows for seamless device connectivity. Fuchsia, a cross-platform operating system, will run on all devices, including laptops, wearables, and desktop computers.

Fuchsia will be given more weight by Google in the future. The question now is, how can we connect Flutter to it? To make the development, Flutter technology engineers focused on Fuchsia. As a result, you can adopt Fuchsia if you've developed Flutter apps for business.

Flutter is now considered one of the top alternatives for designing commercial apps. To design your apps, you can quickly discover certified Flutter developers.

Flutter SDK's untapped potential is currently being discovered by the Flutter community. You're probably aware that Flutter is primarily used to create mobile apps.

The goal of this Flutter group, on the other hand, is to use the technology to create online and desktop programs.  Apps built using Flutter will be created for macOS, Linux, and Windows by developers.

As a result, you can seek certified and dependable developers to assist you in creating the most appealing and distinctive apps for your company's demands.