Which PHP Framework Is Right for Your Application 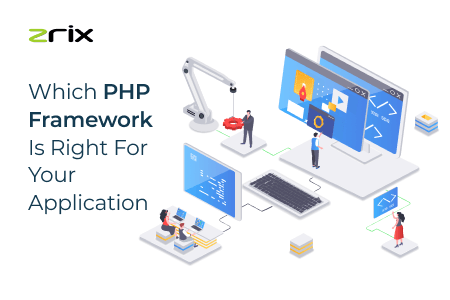 PHP (a recursive acronym for PHP Hypertext Preprocessor) is a server-side scripting language that is commonly used in web development. By early 2021, over 80% of all websites will be utilizing PHP. While many people are unfamiliar with PHP, everyone has heard of one of the most well-known PHP web Applications.

Object-oriented programming is used in many modern PHP frameworks. As a result, before going into a framework, it's a good idea to have a fundamental understanding of concepts like classes, objects, and inheritance.

Laravel offers a fantastic ecosystem that is supported by a large developer community. Because Laravel is one of the most popular PHP frameworks, there is a large library of Laravel applications and packages accessible. Official Laravel packages, as well as third-party packages, are widely available.

Laravel outperforms other web frameworks due to its extensive functionality and development tools, which allow for speedy web application creation. The model-view-controller (MVC) architectural paradigm is included with Laravel. Using MVC architecture can help you to simplify your coding structure and make it easier to deal with.

CodeIgniter is a PHP with MVC framework for swiftly constructing web applications. CodeIgniter includes libraries for connecting to databases and executing different tasks such as sending emails, uploading files, managing sessions, and so on.

Also Read: PHP Vs ASP.NET: How to Choose the Right framework

While using MVC software architecture with CodeIgniter is an option, it is not essential, to improve the framework's versatility. The framework also includes error handling and documentation that is simple to understand.

Slim is a microframework written in PHP. Micro frameworks (or micro frameworks) are a low-level framework alternative to full-stack frameworks. They merely provide minimal usefulness.

While this may appear to be a disadvantage, micro frameworks such as Slim can keep things simple.
In other words, establishing a web development project does not have to be difficult. And if and when needed, professional developers can add new functions.

Other benefits of Slim include, but are not limited to, URL routing, session and cookie encryption, and client-side HTTP. Slim is used by PHP developers to create RESTful APIs and online services.

Symfony is more than just a framework; it also includes a collection of reusable PHP components and libraries. Reusable components are usually useful since they reduce repetition in the coding process.

Symfony was initially inspired by the Spring Framework, a Java micro-framework. Having said that, Symfony is very comparable to Lavarel, however, it is a little more difficult to get started with.

Symfony features such as database support, a modular component structure, and a debugging toolbar tempt PHP developers to use the framework to create online apps, APIs, microservices, and web services.

Phalcon is a play on the terms "PHP" and "falcon." The full-stack framework was created to present a non-traditional method of developing web apps.
The low-level architecture, code compilation, memory management, security measures, and lack of file reads are some of Phalcon's most notable features, which result in better efficiency.
One interesting feature about Phalcon is that it was written in C and is in some ways a C-extension. However, because Phalcon is a PHP framework, you do not need to know C to use it.

FuelPHP is a PHP framework API that uses a hierarchical form of the MVC to 'widgetize' content structures. It is fast, simple, and versatile.

The advantages of this one-of-a-kind architecture include higher modularity and extensibility, as well as improved code structure and reusability.

PHPixie, like FuelPHP, has a hierarchical model-view-controller (MVC) design.

PHPixie was created using independent components that may be utilized in the framework as such. PHPixie components provide beneficial modularity with little dependencies.

Among other things, the framework offers ease of use, great performance, and low coupling.

CakePHP is a PHP framework benchmark for quick development that is inspired by Ruby on Rails.
Because there is little configuration required, the framework is simple to install and use.
One of the many well-known software engineering concepts that fuel the framework is 'convention over configuration' (COC).
CakePHP includes a comprehensive collection of libraries with important components to help with the implementation of this notion. The framework also includes several security features, such as encryption, password hashing, and CSRF prevention.

Yii is a decent alternative for PHP to develop your application. Yii's documentation is pleasantly extensive, and you can learn not just how to construct an app, but also more about working with databases and MVC patterns, for example.

Yii means 'simple and evolutionary' in Chinese. Yii's features include error handling, unit and functionality testing, security measures such as CSRF and XSS, and a layered caching system, in addition to an MVC design.

Using PHP as part of your back-end web development framework is not required, but given the language's popularity, it is worth considering. But, after you've decided to utilize PHP, which PHP framework is most suited to your needs?

Almost every PHP framework can provide you with the total benefits of the languages, namely the flexibility, efficiency, and scalability of the framework. As a result, specificity and research become critical factors in this selection. Consider hire dedicated PHP developer to gain a better understanding of PHP development.