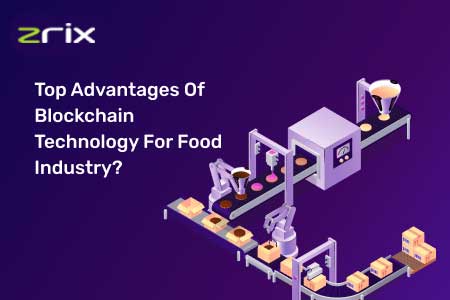 As a result, the blockchain technology development is now being used in the food and beverage industry. Over the past few months, a variety of players like Wallmart, Nestle, Starbucks, Carrefour, Scotch Whisky, and other top brands have reported using blockchain.

“According to some research reports, 20% of the top grocers in the food industries’ will use blockchain by 2025.”

The food industry has many intermediate players and handlers to distribute food to the consumers. As a result, the food industry faces challenges in food security, food scarcity, food safety, and many health concerns.

To fight back these challenges, blockchain technology in food industry can be very useful!

In this article, we are going to put out the use cases and advantages of blockchain for the food industry. But before that let’s know what is the meaning of blockchain and how it works?

What Is Blockchain and How It Works?

A blockchain is digitalized and dispersed spreadsheet whose job is to record all the transactions. Also, the blockchain technology tracks tangible and intangible assets.

In a business, assets are distributed worldwide, a single person cannot control or track them. When someone uploads a transaction, the system runs complex algorithms in the network to check if the transactions are valid or not.

Each transaction is stored in a block (data block), and each block is linked with one another. This leads to the formation of blockchain. This process begins for every new block!

Several computers or nodes implement a variety of algorithms for analyzing the authenticity of each transaction. If the transactions are authentic, then it is accepted in the ledger. Thus, a new block adds to the existing chain.

On the other hand, if a transaction is found unauthentic, it is never added to the blockchain. This is how the blockchain technology development takes place.

The food industry is the newest user of this technology. There is much food ordering mobile app companies in USA that use blockchain and develop secure mobile apps for restaurants, food-related online solutions.

Benefits Of Blockchain Technology In The Food Industry

Blockchain technology applications in the food industry can change the potential ways we buy, sell, and make transactions. As a result, mediators or intermediates would get less chance to collect more money from the farmers.

This new technology uses cryptographic security measures and can be used in exchanging contracts and agreements to track payments.

Some of the tech companies are applying blockchain for the food industry in the context of food safety and supply chain management. Blockchain is rapidly growing in the alcohol and beverage industry.

You must be not knowing this, but China’s food and beverage industry earned a whopping amount of 4.27 trillion yuan in 2018 and became the largest food industry in the world.

In order to manage such a big industry and trillion powered economy, China has shown its interest in the blockchain. With blockchain, China aims to strengthen food and drug quality.

In China, Walmart is also in the race of implementing blockchain!

The growing popularity of blockchain technology in the food industry can be credited to its - transparency, traceability, and tamper resistance. Also, it establishes trust among farmers, consumers, suppliers, and retailers!

Blockchain is certainly a top pick among many IT & Software development companies because of its following advantages.

Advantages Of Blockchain In Food Industry

All these issues are answerable with proper tracking and monitoring with blockchain. Not only this technology can help in food security and food safety but it can sustain the environment in a more friendly manner.

Hence, if you are also looking to implement this data-based technology in your business, then you can contact Zrix - A leading blockchain development company in USA!

Kindly, leave your valuable comments and feedback in the below comment section. Let us know which topic would you like to hear from us.