How IoT Connects People, Devices, and Sensors Together? 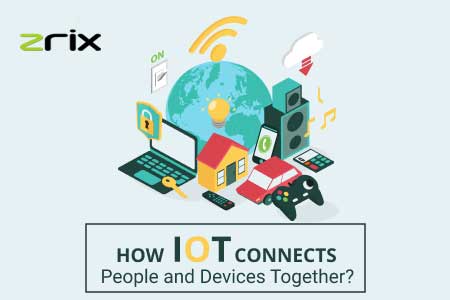 IoT refers to the “Internet of Things” that describes connectivity and networking of electronic devices via the internet.

To some extent, one great example of IoT appliances is smart houses where many devices can be connected to make our lives easier. The companies that work to establish such connections are the IoT development companies.

These companies though produce best devices, face a lot of criticism in data collection, cybersecurity, and privacy issues. To many of us, the IoT might look new; however, the idea of connecting devices together isn’t new at all.

It has been the talk of the internet world for several years.

“Furthermore, we even had the first internet-connected device in 1989. The device was a Toaster!”

In this article, we will discuss the establishment of the internet with people, the evolution of the internet into everything, the ways it collects data, how IoT works, and what are the benefits of IoT?

You will get the answer to all these questions, but before that let's talk upon IoT's introduction!

The term “IoT,” means connecting everything to the internet. However, if you ask someone about the internet of things, then they will probably answer you it is an object that can “talk” to us.

But, that’s not the story!

The Internet of Things has several devices in its collection, some talks to us like ALEXA, some web can wear like WEARABLE TECHs, some make our home a SMART HOME, and many more.

All such devices have few things in common, i.e., automated systems, artificial intelligence in them, their machine learning experience, data collection, and data analysis.

Also Read: 5 Practical ways in which IoT can help the businesses

The best way to describe IoT and IoT connected devices is as follows:

"The IoT is a network of physical objects, having sensors, software, and technologies fitted in it. These devices fulfill the purpose of exchanging data with other systems and devices using the internet."

The last few years have seen a sudden increase in internet users. The internet is now emerging fastly in our daily lives. Today, living without the internet is impossible. For some, it is a part of their daily habits and for some others, it is more towards business-specific.

In whatever manner you take it, the internet is till now successful!

The best example is that the companies can send and receive data at their different offices at different locations. Previously, the postcard was the method and postman was the means of transportation.

But, now every device connected to the internet is the means of data transportation and that too in a real-time manner. There are many top IoT development companies in the USA working day and night to make this network big and simple.

In this new era of the internet, you don’t need any physical connectivity either in the personal network or in a business network. IoT is here to make communication easier and faster.

Nowadays, connecting devices to a smartphone for regulating your AC temperature, fridge temperature, for switching on-off bulbs lights, etc. is all possible.

IoT is leading all of us to the most modern and heavenly made society having wireless connectivity, smart customer gadgets, better AI & ML, and easiest cloud computing tech.

All these technologies in IoT devices promote a new age of human living, business, and industries.

You have to just think of a smart device, IoT will make it real for you!

While IoT is busy in connecting devices, speculations are that the Internet is on the edge of becoming the greatest tool among everything for mankind.

As the internet can explore networks, connections, data between people, devices, things, systems, processes, etc., the IoT is now termed as the INTERNET OF EVERYTHING.

“This internet of everything or IoE is built upon IoT technology that can advance the power of the internet in our lives and businesses.”

Additionally, it can improve people’s lives by bringing the tech revolution. The best example is the use of IoT devices in the healthcare industry.

Yes, the internet of things is potential but it has a downside too!

It is data collection. Imagine if you are surrounded with IoT devices, some see you, some hear you. Will you ever think that the devices can collect data when you are not accessing them?

“A lot of people don’t ask this question. Moreover, nobody cares about the data, where it is going? For what reason the companies are collecting the data? How useful it is to them?”

There is some serious challenging question which needs an answer. We have our own answer. And if you also have one then don’t forget to mention it in the comment section!

Till then let’s see how -

How IoT Is Bringing People and Data With Each Other?

The internet of everything is now a broader concept of IoT because it is now becoming easy to bring people and data together. The credit for this collaboration goes to the cloud communications.

As the businesses receive real-time data, making a decision is a lot quicker due to which the business processes are automatically enhanced. Thus, the demand for sensors in the cloud is increasing in order to take the real advantages of the IoT environment.

The key to the advantages of the Internet of Things based tools is through the cloud collaboration, sensors, and APIs; thus, taking businesses to the next level.

When IoT devices and people are brought together using the cloud, chances of the machines to start a more effective communication on real-time bases increases.

For example, a smart car (car built with IoT technology & Cloud) in an emergency situation automatically sends a distress signal to the nearest security offices.

Also Read: 5 Advances In The Internet Of Things That Will Change Business In 2020

The signal will directly be filed into the database and an immediate response will be received by the car. Thus, the life-saving rate in an accident on the road will increase.

This scenario is a great example of taking faster decisions, collecting the right required data, and improving human life.

“Therefore, if the cloud communications and IoT work together then we can expect a better world in the future.”

The IoT connected devices have an IP address that forms a wireless network or WLAN - Wireless Local Area Network, Wi-Fi through which sending and receiving data becomes unique.

Every IoT device has embedded processors, sensors and modules to collect & receive data.

The thermostat IoT device with the help of a temperature sensor measures the temperature around you and displays the reading in the app which is installed on your smartphone.

Again let’s take an example of intelligent AC. The AC’s app is installed on our smartphone and we can control the temperature with that.

The world is now technical, more and more technologies will come, will advance and the sophisticated program will connect more IoT objects.

Thus, one thing is true that IoT is surely a revolutionary technology fitting the right system in the right place, saving energy, making environment friendly, and collecting data through countless streams.

To the IoT development services provider USA all these IoT connected devices have given many benefits such as;

There are endless opportunities and possibilities for IoT devices development. More processes, objects are expected to come into existence.

We have learned that the IoT is able to automate repetitive tasks, saves time, and focus more on the challenges ahead to connect the world and all systems in a single network.

However, there is a problem and it might sound scary!

"More than half of the world population cannot access the Internet."

Will IoT prove itself as a life-changing revolutionary technology for all 7 billion people of earth? What do you think?

Don’t forget to mention us in the comment section below!

Our personal opinion is that IoT technology is expensive and not affordable for all. The people living in smart homes can make full use, but not poor people.

Hence, IoT has yet to achieve the title of - "Internet for everything for everyone everywhere."