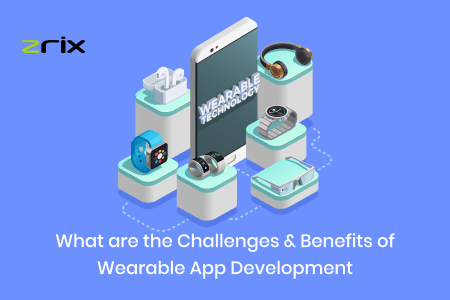 Wearable Devices refers to those devices or electronic gadgets that we can wear. The technology behind these is called wearable technology that is now very popular in the mobile application development industry. Although many experiments are going on wearable technologies, it started to bloom in the last couple of years.

Products like Fitbit, Android smartwatch, Apple Watch, smart glasses, Pebble, Google Glass, temperature controllers, etc. are the result of this technology. As time passes, products like these will dominate the market in every industry/vertical.

However, there are many challenges that wearable technology has to overcome to give its benefits to all. And today, in this article, we will tell you those challenges and benefits of wearable devices, apps, and technology.

Intelligence is undoubtedly the reason for every new innovation and technology. The intelligence behind wearable technology is the result of the best IoT development services in USA.

IoT devices are known as Smart devices. And wearable is one of their categories!

“According to reports, the sales of wearable devices in 2022 will double, and total connected devices will cross the $1 billion mark globally.”

The advent of wearable technology raised curiosity among industries, sectors, verticals, and tech experts. Everyone wants to use it to its relevance and potential for making profits.

Even consumers are willing to use these devices as they make their lives easier!

The product of this technology increases the user experience and enhances overall business performance. The biggest benefit of wearable technology is that it helps in the fastly advancing of any business using top wearable devices.

However, to use the device, you need to use wearable apps. And the Wearable apps are quite a buzz word. Not because they are fascinating, but they are trendsetters!

Also Read: Top 5 Wearable Application Development Devices We Can Use

You will find tons of companies making wearable apps for Android and iOS devices. But, not every company can make smart applications with high functionalities, user interfaces, though there is a pool of opportunities.

Each wearable app has its own functions directly dependent on the wearable device!

To become the best wearable device app development company in USA, or the best developer of wearable apps, you must know how to create the above-mentioned apps.

For creating wearable applications, you need to understand the wearable app development process and the working process of wearable technology!

In the US, 1 out of 3 members uses wearable devices!

“As per reports, by 2025, the wearable technology market will have 30% of the world population as its consumers, and the market revenue will cross the $70 billion mark.”

These devices and their associated technologies have moved the screen into a real-world context while creating more opportunities, employment, and a new technological revolution!

Below we have some global stats about the future of apps for wearable devices: 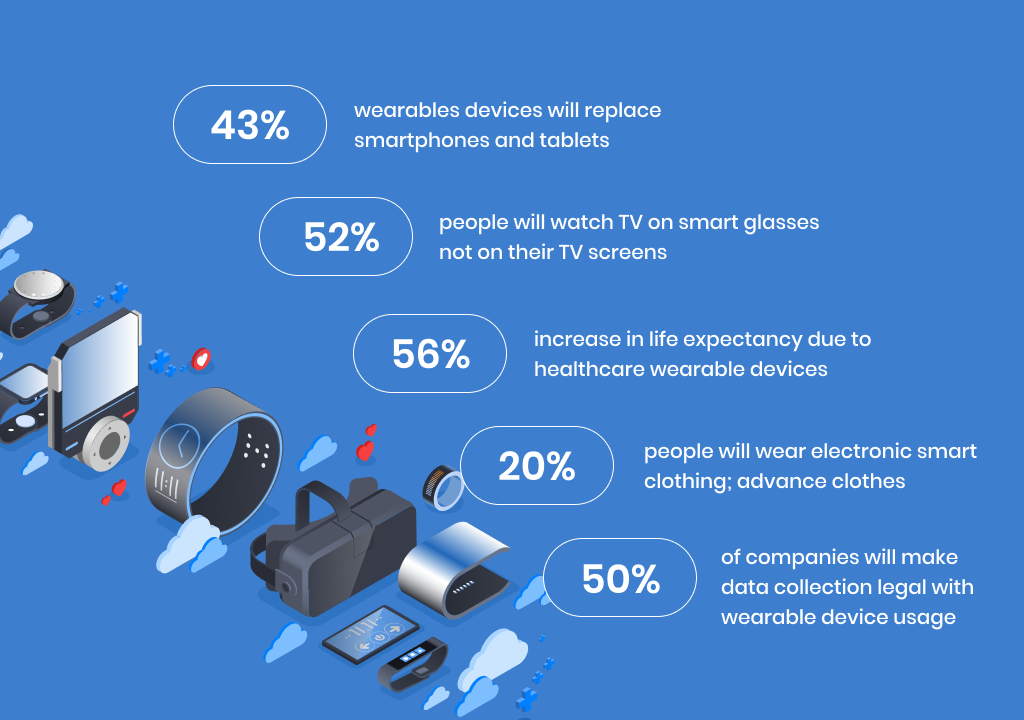 The wearable device industry indeed has spectacular app ideas and projects going on. And as the technology expands and matures, the app designers and developers will have new possibilities in it for the humans to interact with the upcoming new age of the digital world.

The new era will expand exponentially and exceptionally only if every top mobile app development company in USA plays its part well in the digital ecosystem!

There can be more challenges and benefits of wearable applications; thus, the development needs extra caution, better resources, and a consumer audience that understands the technology well.

Tell us in the comment section! What is your take on it?

The big fat future of wearables is in the healthcare automation industry!

In the future, healthcare smart devices will benefit more from us by building a world-class healthcare system. In western countries, it is already happening.

And by the end of 2021, China and India, the two major powers in Eastern continents will use wearable devices exceptionally. What do you think?

Contact us for any further query in wearable app development!