Difference Between Crypto and Blockchain Technology 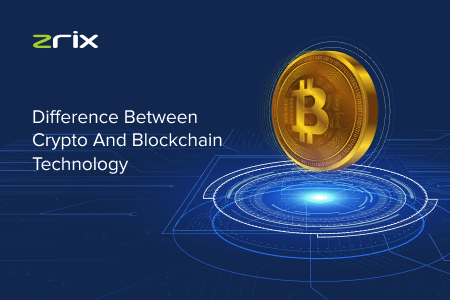 What Is Blockchain technology?

The enhanced privacy, more transparency, and faster traceability of blockchain technology are the basics and core of this trust.

Beyond issues of trust, blockchain offers a slew of other economic advantages, such as cost reductions via enhanced speed, efficiency, and automation.

Blockchain is designed for the business that decreases overhead and transaction costs by dramatically decreasing paperwork and errors, and it reduces or eliminates the need for third parties or middlemen to validate transactions.

Cryptocurrencies and blockchain technology increase the dependability, safety, honesty, and traceability of data shared throughout a company's network while also reducing costs through new efficiencies.

Your data is too sensitive and crucial, and blockchain has the power to radically alter how it is regarded. Blockchain is the super technology, which has various types of Blockchain networks that prevent scams and illegal behavior by creating a record that can't be changed and is encrypted end-to-end. On a blockchain, privacy parameters can be managed by anonymizing personal data and limiting access through permissions. Because data is stored over a network of computers rather than on a single server, hackers have a tough time accessing it.

Without blockchain and digital currency, each business would be responsible for its database. Transactions and data are documented identically in diverse locations because the use of blockchain technology employs a distributed ledger. All network participants with permission access see the same information at the same time, ensuring perfect transparency. All transactions are time- and date-stamped and are logged irreversibly. Members can now access the entire transaction history, practically reducing the risk of fraud.

Conventional paper-based procedures are expensive, prone to human error, and frequently require the involvement of a third party. By leveraging blockchain to streamline these processes, transactions may be completed faster and more efficiently. The fundamental blockchain technology can save both documentation and transaction data and removes the necessity for paper trade. Clearing and settlement can be performed much faster because there is no need to reconcile various ledgers.

Cryptocurrency is a digital and virtual currency that is dispersed over a large number of computers, making it nearly hard to counterfeit or double-spend. It's fundamentally a technical process that allows for safe online transactions denominated in virtual tokens.

Cryptocurrency also provides the privacy and security features that have long been a concern for cryptocurrencies. A set of difficult-to-solve mathematical riddles form the foundation of the blockchain ledger. It improves the security of bitcoin transactions over traditional electronic transfers. To enhance safety and confidentiality, cryptocurrencies use pseudonyms that are unconnected to any user account or stored data that may be traced to a profile.

Cryptocurrencies have long been thought to be the most efficient means of trade. International and domestic cryptocurrency transactions are lightning-fast. Because there are just a few difficulties to overcome, the verification will require very little time to finish.

A cost-effective way of transaction

One of the most prevalent uses of cryptocurrencies is to send money around the world. With the use of bitcoin, a user's transaction costs are reduced to minuscule or non-existent quantities. It accomplishes this by eliminating the need for third-party authentication, such as that provided by VISA or PayPal. It removes the need to pay any type of unwanted transaction fees.

One of the advantages of blockchain technology is its global use, which enables quick and precise transactions. When more than one state or country is involved in a transaction, concerns of jurisdiction emerge, especially when claims are brought for breach of contract or fraud. When foreign rules are involved, things get even more convoluted.

Another issue is the lack of transparency and accountability that need to be concerned about when implementing blockchain technology. Users can choose to be entirely anonymous by not providing any identifying information and instead of using a pseudonym. In these early phases, it's uncertain whether the lack of openness would provide insurmountable challenges.

Blockchain vs cryptocurrency and the basic and main difference

Blockchain technology also provides several benefits to banking and finance software solutions and can be used to provide decentralized platforms that need a coin. The blockchain is the distributed ledger technology that enables a network to retain consensus. The network can monitor transactions and transaction costs and information thanks to distributed consensus. You can also hire top blockchain Development Company to help you out with all issues.

Cryptocurrencies are the tokens that are used to convey value and pay for transactions within these networks, as well as to offer network incentives. Furthermore, you might think of them as a blockchain tool that can be used to serve as a resource or service, or even to digitize asset ownership. But of the future of cryptocurrencies and blockchain is broad.