What Are The Advantages & Disadvantages Of Flutter Mobile Application Development? 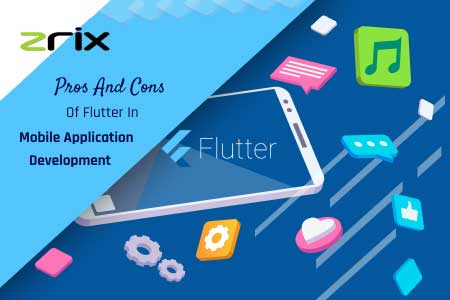 To run your online market easily, you need iOS and Android apps which are the main platforms in smartphones. As a business person, you need to develop the same app writing different codes for both platforms.

Writing the same code in different styles sounds time-consuming and double trouble to us.

Therefore, cross-platform mobile application development in USA has gained popularity in the mobile industry over a few years.

From the last 5 years, many new platforms arrived and gave new directions to app development. The web-based tools like Adobe’s PhoneGap, Microsoft’s Xamarian, and Facebook’s React Native with their respective advantages & disadvantages stands as a successful mobile app development platform.

Like these platforms, Flutter in mobile application development is a new star that launched in 2018.

If the app development is a breeze in Flutter, then the development community and platform risks are its most significant downsides. Therefore, in this article, we are going to make you face to face with all the Flutter advantages, disadvantages, and benefits.

To wrap this whole article, we will tell you how beneficial is Flutter app development in today’s modern online business. Without any microsecond delay, let’s load all the Pros And Cons Of Flutter In Mobile Application Development.

It is estimated that an average American citizen spends 3hours each day on its mobile.

However, the usage of apps varies differently! Some use gaming apps, some use eCommerce apps, some do online trading, then some enjoying switching to and fro from one social media app to another.

What Is Flutter Mobile App Development?

Flutter is a free, open-source app development framework that builds iOS and Android apps from the same code. It is also known as Google’s modern app development kit specially designed to create mobile apps in Android, iOS, and Google Fuchsia.

“Google Fuchsia is a new app running platform that is being developed by Google.”

Though Flutter is in the market since 2017, it was first launched in December 2018 as a full product, not a beta version!

Although it is relatively a new tool in the app development business, B2B online market giant company - Alibaba & Tencent - a Chinese internet-based group, adopted Flutter in their app.

However, that doesn’t mean it is a magic bullet to kill your all app development troubles. In this article, we will list all the Pros And Cons Of Flutter In Mobile Application Development.

Here Are Some Facts On Flutter App Development

Also Read: What are The Best Ways To Cut The Cost Of Mobile Application Development?

How Does Any Flutter Mobile App Work?

One cannot call Flutter a framework because it is an SDK for applications designed for touch screen devices. Due to its nature and capabilities, it works well with iOS and Android.

In order to develop apps in Flutter, one has to learn DART programming, which is object-oriented, loaded with many features, and build native applications.

Furthermore, widgets are the core of Flutter both for iOS (Cupertino) and Android (Material Design) mobile devices. UI designing in this framework is all about combining widgets, including text, shapes, animations, etc.

But, one disadvantage it has is that it is not fully known to everyone. Hence, it would be nice if we briefly put out all the pros and cons of Flutter mobile application development. 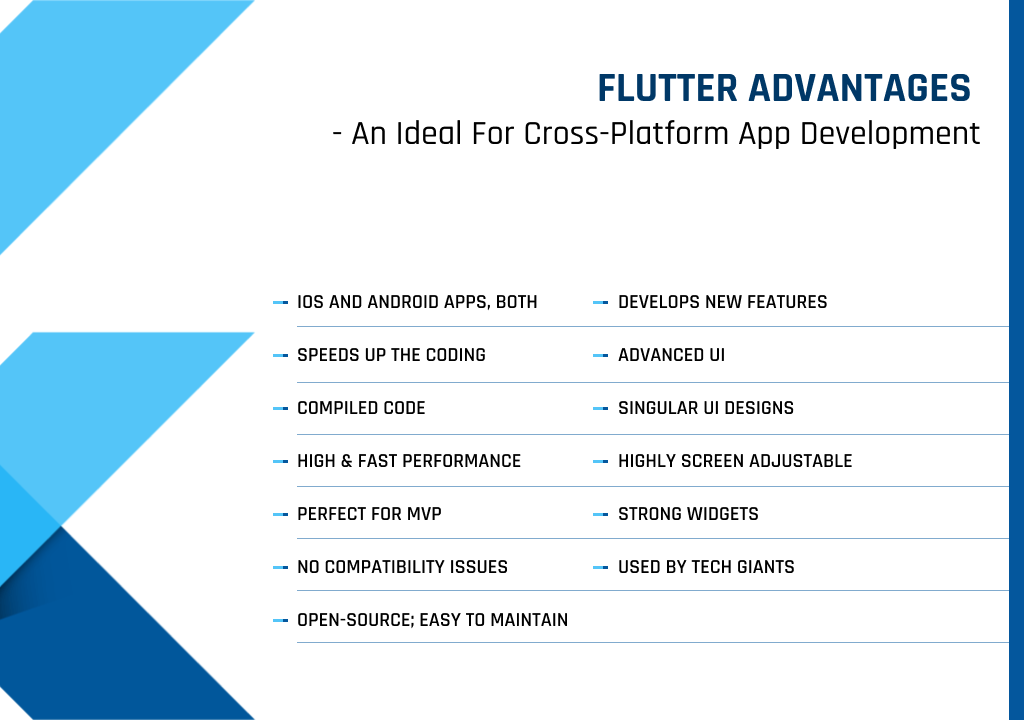 “Providing this maintenance and support with Flutter is a great way of earning money. Even more, there exist many Flutter App development companies in USA who as startups are creating their own team.”

However, Flutter doesn’t support desktop and web applications. You may ask us why?
The answer is simple; its nature is to work only for mobiles, not PCs and laptops! 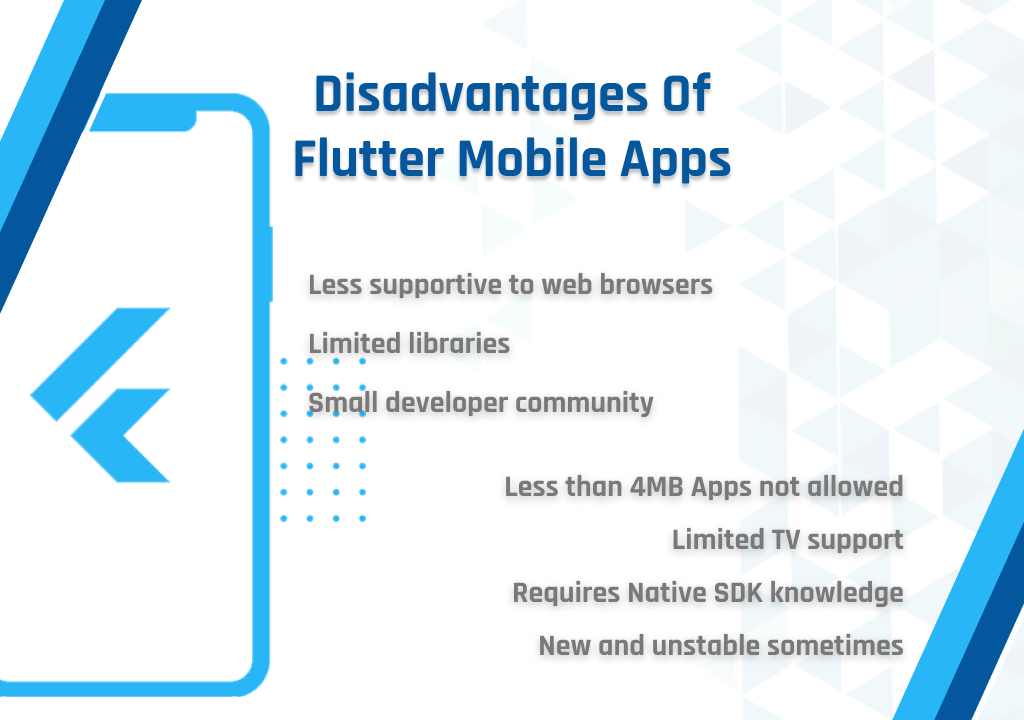 As a matter of fact, CMS Website Services - a top web and mobile app development company in the USA has a team of expert and certified native developers to help you in your Flutter project.

Also Read: What Are The Risks In Mobile Application Development Industry?

Is flutter Mobile App Development Good For Your Business?

As you can see, making a decision on Flutter whether it is useful or not is actually reckless. We recognize that Flutter mobile app development framework has more advantages in comparison to disadvantages.

Many of us can have a debate that it is mainly a mobile-specific platform. But, I would say that keeping it mobile-specific is a good thing because 54% of the traffic on the internet comes from mobile phones, tablets, iPads, and other mobile devices.

Maybe it sometimes complicates your code, but we believe that in future Flutter will be a king of mobile application development frameworks. As of now, you get your mobile in less time because its fast app development process saves your money and allows you to validate your MVP idea quicker.

In Flutter, to develop an iOS app, you need approximately 400 hours, while for the Android app, you need 250 hours. In order to find out the development cost, you can hire Flutter app developers and find out the price with respect to their per hour cost for both Android and IOS. 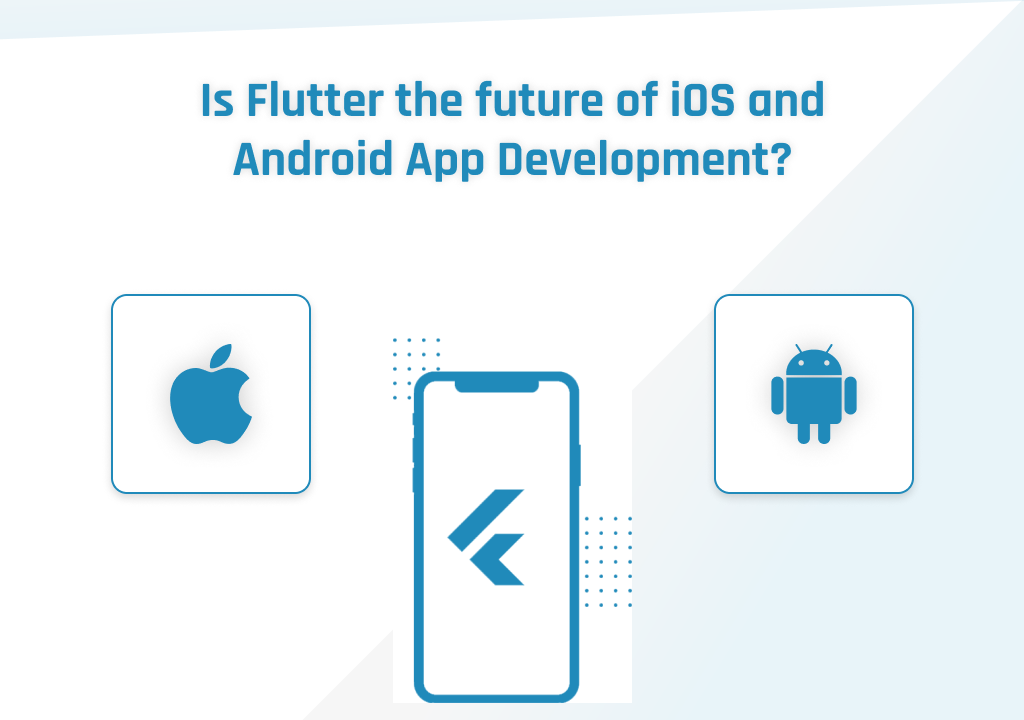 Undoubtedly, Flutter is the most exciting app development tool in the IT industry. However, how much benefit it can give to us is still unknown. But it would be interesting to know that IT Startups, e-commerce businesses, Designers, 2D game developers, etc. all are getting positive results in iOS and Android mobile app development.

Thus, this question is irrespective, and more awareness is required on Flutter mobile app development! Moreover, many experts have already confirmed the Flutter Is The Future Of Any Mobile App Development Framework.

In case, if you have any doubts related to mobile application development, Flutter mobile apps, and more, then you can contact us anytime 24x7 by messaging us on live chat and by contacting us here.