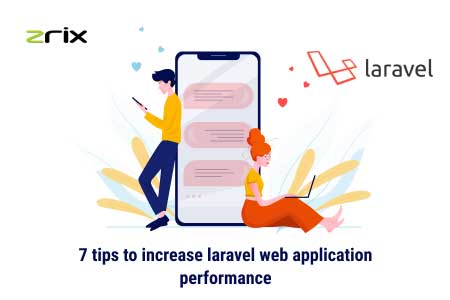 After its release in 2011, Laravel application development grew well and is considered as the best PHP framework. From the complex APIs to simple web apps, Laravel is a one-stop PHP development platform for any business.

The libraries, packages, and architecture in Laravel easily build amazing sites while using well written structured code. However, to make Laravel web applications, it is good to hire Laravel developers who utilize and enhance the power of this framework.

The framework, all associated libraries ensures the developers to create a powerful and robust code. However, nothing is perfect in this world! Therefore, the code can undergo optimization to tune the smooth performance of Laravel web application performance.

Performance and optimization determine the success of the business application. In that context, ensuring the high performance of the Laravel web application is important to deliver.

As the Laravel PHP framework build business information systems, low performance by applications can seriously put you to disadvantages. Furthermore, due to unexpected negative results, your business may incur losses.

Hence, if you are facing such a situation with your Laravel web applications, then we have a collection of several tips that will optimize Laravel’s performance.

Consider this as a guide/tutorial to optimize the Laravel’s performance from the best Laravel application development company in USA. Before we proceed further, have the latest versions ready in the database, Laravel, web servers, etc.

Laravel is all above leaps and bounds due to its Quick development approach, well-structured beautiful code, MVC architectural pattern, packages, and a set of libraries.

So, if you plan to hire a Laravel Developer or become one, then you must understand all the core concepts of performance optimization tips of the Laravel web applications.

Below are some of the tips we have designed for you!

Laravel PHP framework has a vast number of libraries that are included in applications. Though it makes customization and coding a bit easy, it has a downside too. The high level of drag experienced by application slows down its performance.

Hence, it is important to review libraries! Moreover, if you think application development is possible without the library, then remove it from config/app.php and speed up your Laravel web app.

Laravel has a uniquely useful tool, “Artisan command,” that boosts the performance. Its setup is as follows:

It is useful when your Laravel developer creates routes and configurations! The cache is a plain array to load cache instead of loading a real object. It makes Laravel works faster. Once you config your routes files, re-run this command so that Laravel handles the changes.

Now cache user data, locations & settings to limit the SQL queries amount. It is time to invalidate the cache upon the change in data. In addition to it, always make sure to have good indexes for your database.

Like the above code, cache configs, routes, and views and add all these commands to your Forge deploy script.

For the final step, install and Setup PHP OPcache that cache your entire PHP code to avoid recompilation!

Also Read: 5 Reason Why Choose Laravel App Development Over Other PHP Framework In 2020?

Laravel uses Eloquent ORM that easily maps your all object models to the database tables. First, with a few simple files, you easily map out your object structure, then Eloquent handles all the database interaction such as CRUD - create, retrieve, update & delete operations.

However, there is a disadvantage to it! It is that whenever Eloquent handles the database interactions, the approach is always lazy loading. Eloquent never retrieves the data unless it is referenced somewhere in the code.

Though it may look harmless to have extra queries, the queries increase the data, and additional data reduces the performance. Instead of doing this, hire our dedicated Laravel developers as we set queries to “eager loading,” so that any associated object models can be retrieved upon a call of a query.

Running above code reduces the operation in only two querries!

Laravel has a wide variety of plugins that allows you to add more functionalities to the Laravel web applications. Increased functionality increases libraries & files, and their loading makes the application slower.

Find out at which providers you load through your config/app.php file. Once done, cut down the unnecessary files. Moreover, Laravel uses the composer for managing its components; thus, cutting down the composer.json file can reduce all the dependencies that are loading.

In any development process, maintaining code assets is possible and must be in separate files like routes and configuration files. To help with this, Laravel application has some artisan commands which you can run before you deploy your site:

These commands compile your all frequently used classes for a quick reference into a single file. Also, for faster loading, they combine configuration files and routes them all into a single file. Thus, it makes adding your own classes easy into the optimization for increasing the performance.

After installation, add the toolbar at the bottom of each rendered view, that shows SQL queries issued on a given page and the amount of memory used by request to your application.

Queries profiling is the best way! Many laravel development services providers in USA use this method to find the potential bottlenecks in a structured, well-written code while you work in a local development database with smaller data sets.3

Computers natively don't understand PHP. Compiling PHP to bytecode is challenging; that’s why the Zend engine interprets your PHP files to execute C routines. However, the process is slow!

Every time your server runs a PHP file, it converts to tokens and is done by the AST parser and interpret it. Unfortunately, the compilation is performed every single time, even though the results are the same.

Therefore, to make your Laravel web application act fast, you must compile it once. And for this, JIT Compiler is used! The JIT compiler for Laravel is HHVM that was created by Facebook for its use, but now Wikipedia also uses it.

Use CDN To Deliver Static Assets

This fundamentally loads the web page quicker and offer high performance. This implies you must characterize the static resources (JS, CSS, HTML, pictures, recordings, and liveliness, and so forth) on a specific application.

Laravel web application performance tuning and optimization is important that concerns all businesses who rely upon Laravel powered software, apps, tools and websites.

By implementing all the above-mentioned tips, your hire dedicated Laravel developer can create and maintain applications that ensure more speed, security, and reliability to the business.

So, if you have ever tried optimizing the performance of your Laravel web application, then forget not to share your experience in the comment section below.