10 Tips to test the security of an Android application 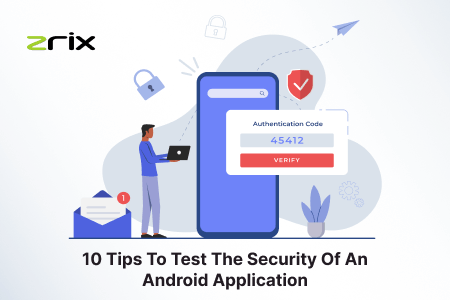 Android is a Linux kernel mobile application that has been widely used on a wide range of devices, especially mobile smartphones, throughout its life. Most businesses, spanning from banks to telecommunications corporations, have developed Android apps.

These mobile apps, like the generic web-based applications, require a pen-test activity as an element of their SDLC life cycle. With the increased need for high-end smartphone applications.

Furthermore, because individuals rely too heavily on their Android smartphones, hacking them could result in the loss of a significant amount of sensitive data, such as passwords, emails, and other information.

As a result, the android app security checklist of applications that handle sensitive user data is critical.

What is an Android application?

Android security app is a Linux operating system that is an open-source technology for mobile devices that as smartphones and tablets. Android was developed in collaboration with the Open Handset Alliance, led by Google, and other companies.

Android takes a comprehensive solution to mobile application development, which means Software information enables Developer Mode simply to have code for Android, and their apps should operate on a variety of Android-powered devices.

Almost 190 countries used Android and drive millions and millions of mobile devices. It has the largest installed base of any mobile platform and continues to grow at a rapid pace. More than one million new Android devices are enabled every day throughout the world. You can also hire a dedicated android developer to perform all the related tasks for android app development.

10 Tips on how to secure an Android application

Various backend APIs believe that it can only be used by apps that have been designed to use it. To protect against unwanted assaults, backend systems should have android security architecture measures in place. As a result, make sure all APIs are authenticated for the mobile platform you're planning to code for, as transport protocols and API authentication can vary.

If at all feasible, make sure that private user data is never kept on the devices or your network. This is because holding user data unnecessarily raises your risk levels. If you must keep data because there is no other option, utilize encrypted data containers or key chains, with cookies for password protection. Finally, reduce your reliance on logs by ensuring that they are automatically removed after a predetermined period.

When Custom mobile application development services creating for different mobile operating systems, it's best to first learn about the product's protection devices and restrictions, and then code accordingly. To properly manage and distribute the program on your selected platforms, you need also consider distinct user case situations, encryption compatibility, password assistance, and geo-location data support for the OS.

To save money, some developers, particularly beginner developers, overlook app testing. App testing, on the other hand, is an important component of mobile app development that must be done if developers want to create a great app that is free from errors, faults, and problems.

At the time of Android application development, emulators and simulators are commonly used to test the app. But, before releasing an app, it is critical to test it on a genuine Android smartphone so that designers can understand how the app appears and performs on a real device.

There are numerous ways to battle Android malware and viruses now that they are a well-known part of the smartphone market. Kaspersky, AVG, Avast, and Norton are just a few of the top antivirus (AV) businesses that have their Android anti-malware apps. Lookout (which also has a premium version) and TrustGo are two free Android antivirus apps that we recommend. Also, there are several mobile app security testing tools available on the Google Play Store and App store that you can use for testing the security of your android apps.

Avoid downloading any applications from an unknown source

Downloading apps from sources other than the official Google Play app store and Play store is the quickest and easiest way to infect an Android phone or tablet with malware. A check box in the Settings menu of any regular Android smartphone allows you to enable or disable the installation of "unofficial" apps. An Android security setting that maintains its integrity is significantly more secure.

Avoid unfamiliar Wi-Fi networks, which is not secure

An unprotected Wi-Fi network may appear to be a cheeky treasure of free internet, but it could be deadly when you're using an older Android operating System in specific. Fake Wi-Fi networks can be exploited to conduct a 'middleman' assault, in which any inputted data – even passwords and private details like credit card information – can be captured by a third party.

Use Chrome as your browser

Since the release of Android 4.1, smartphones and laptops have come pre-installed with both the stock Android browser and Chrome. Chrome is slightly safer than the standard version, with fewer publicly disclosed security flaws in recent weeks. Chrome for Android is also expected to be getting more attention, with its pre-installed status indicating that it will be the future default browser for Android.