Important Tips to Considering For Ruby On Rails Performance 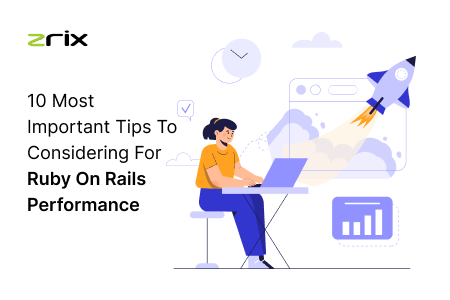 What is Ruby On Rails?

Ruby on Rails is specifically known as a RubyGem package library that is installed via the operating system's command-line interface. Ruby on Rails is an open-source website development platform that gives Ruby programmers a faster way to write code. It's a group of code libraries that provide a ready-to-use solution for common website chores like creating tables, forms, and menus.

To develop web programs that work on a web server, it integrates the Ruby programming language with JavaScript, HTML, and CSS. Ruby on Rails is a back-end or server-side web app development framework since it operates on the webserver. Ruby on Rails is exactly like a PHP framework like python and Symfony, or Laravel frameworks.

The simplicity and smoothness of Ruby on Rails performance tuning are the language's biggest selling points for developers. It's designed to make development teams more effective and adaptable by facilitating agile development.

Tuning on the server-side:

In the development of any web application, the server is crucial. As a result, ruby on rails performance tuning to meet all of your product needs and keep good performance, always choose the proper service for your application.

Ruby Code should be updated:

Because Ruby as a programming language is updated regularly, you'll need to update your Ruby code to gain better performance.

Also Read: Why Use Ruby on Rails Development Services For Startups

Check to see if the server is switching

Keep in mind you have enough RAM, which should go without saying. Rails use a lot of memory, which adds up rapidly when you have numerous Puma processes and background workers.

SQL is something you should learn!

This one is debatable, but I believe that while you can construct complicated applications in Rails without knowing SQL, you should try to write SQL queries. If you know what you're doing, SQL may be used to perform amazing rail performance optimizations or perform specific tasks.

Be cautious of pagination

Pagination can be a significant issue if your query is slow, particularly if you are combining the query. You may often achieve good results by changing the pagination method and omitting the row count. When pagination does not require a count to get the total number of rows, speed is frequently greatly improved. You should also look into the contemporary Pagy gem, which is significantly faster than previous options.

The most efficient approach to make code is to not run it at all. As a result, caching your data and operations makes perfect sense in any language, but notably in one that isn't the fastest, such as Ruby performance optimization. Let's get started because there's a lot to discuss here.

Materialized database views should be used

An SQL query creates a database view, which is similar to a virtual table. A large query can be saved as a view and then accessed as if it were a table. A materialized view is similar to a view, except it additionally preserves the query result. As a result, it's similar to a cached dataset. This is incredibly quick, but the information will be outdated.

ActiveRecord is popular among developers, however, if you have a lot of data, you should avoid using it to insert it. Instead, using the ActiveRecord-import gem to insert this data is a far better option.

Make use of server metrics

Considering how much server load the Ruby on Rails development performance optimization process generates might help you improve performance. Telegraf can be used to collect metrics, and Grafana can be used to deliver alerts when something goes wrong.

Advantages of Ruby on Rails

When it comes to running an internet business, safety and security are paramount for a web application development company. You won't have to worry about it with RoR because it has many built-in safety features. Not only that, but it also enables both behavior-driven and test-driven development.

The timeframe and budget are two of the most prevalent problems that entrepreneurs confront. They want to complete the projects in a cost-effective manner and on schedule. This is where RoR comes in; it's an open-source framework for web app development that runs on Linux flawlessly. Furthermore, it is a completely free open-source software operating system.

The most astonishing thing about RoR is that it is both short and expressive. Hire ruby developers in USA that integrates it with a variety of third-party libraries, which speeds up the development of features. As a result, RoR is one of the most productive and simple programming languages for programmers.