Android vs iPhone - Which Smartphone You Should Buy? 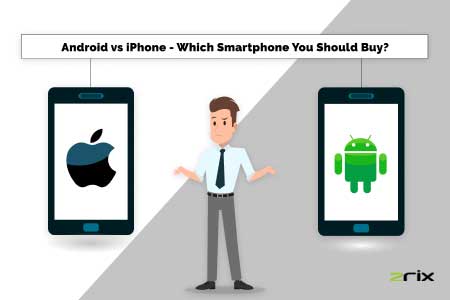 As a result, you are left with only two kinds of phone iPhone & Android!

However, that time is now gone, both the platforms have matured at this stage and made a strong existence within a decade. Both have increased their respective set of features and are intensely competing with each other.

There is a high competition in the Android vs iPhone features. Both have their advantages, disadvantages, and one can pick any of the phones depending upon the price & budget.

If an app can run on both Android and iPhone, then why there is so much competition among the uses on Android vs iPhone! Why people ponder a lot before buying a smartphone!

Android or iPhone: Which Is A Better Smartphone?

When you walk in a big city, you can find many people sporting their iPhones. It would appear as is iPhones are supreme. However, if you take a look at the Android vs iPhone statistics worldwide, then Android is far ahead of the iPhone in terms of sales.

Also, when you look at the data of Android vs iPhone market share, you would know that the Android market share is more than the iPhone!

The main reason behind iPhone’s less market share is its high cost. Due to its heavy purchase cost, only a section of society can afford to buy it!

As the world is progressing, mobile phones are a new status symbol. Without a doubt, we know the iPhone is a modern century’s status symbol for most people.

A newcomer’s first choice can be anything, either Android or iPhone. When it comes to choosing a smartphone, picking one out of many is a daunting task.

Even more, smartphone choices depend upon the introvert and extrovert nature of the individual. It is said that Android phone users are less extroverted than iPhone users.

Android’s major share is in lower-income areas like Asia, Africa, and many other developing nations. While the iPhone users are more in USA, UK, France, Japan, Australia, etc.

Also Read: 10 Features Of Android 10 That Will Transform Your Phone

iPhone is only made by the APPLE, while there are hundreds of companies that use Android operating systems to make other smartphones. Between Android and iOS, Apple has tight control over its hardware and software architecture.

On the other hand, Google develops Android software, while different smartphone making companies like Samsung, HTC, LG, Motorola, RedMI, One Plus, etc. build their own hardware.

Therefore, iPhone has a standard size, weight, features, etc. while every Android phone varies in such physical parameters. If you have to see better differences between Android vs iPhone hardware development, then buy a premium-priced Android phone!

Apple follows strict processes, dialogs with its app development, while Google is a bit lax!

Previously, it was necessary to hire Android apps developers in USA for making Android apps. Likewise, for the iPhone, it was mandatory to hire iPhone App Developers. However, that’s not the case now.

It has now become easy for mobile application developers to use frameworks like PhoneGap, Flutter, Xamarian, Ionic, etc. to make a hybrid cross-platform application that can be installed and run on both Apple and Android phones!

Many Android mobile makers are slow and take more time to update their phones to the latest Android versions. Due to this, many previous Android phones fail to achieve compatibility with respect to the updated Android versions.

However, this is not the case with the iPhone. Apple’s iOS support for older phones is better than the Android. Apple takes more time to release the new iOS versions.

But, Android has released tons of versions in a decade. It seems Google is trying hard to beat the operating system of the iPhone!

Before iPhone came into the market, Nintendo’s 3DS and Sony’s Playstation Vita dominated mobile video gaming. However, after 2007, everything was changed when Apple devices like the iPhone and iPods were launched.

Today, Apple is a dominant player in the mobile video game industry with millions of players and tens of thousands of great games. All thanks is to Apple's hardware and software integration that left Nintendo and Sony behind.

In the case of Android, game developers intend more on making money! As a result, the last five years have seen a sudden rise of Android phones because these phones offer interesting gaming features.

Hence, comparing iPhone and Android isn’t easy and we need more time to conclude this!

(iPHONE HAS MORE ADVANTAGES, BUT IT'S A TIE BETWEEN BOTH)

The smartphone industry got revolutionized when AI + Voice Interface was integrated. Today, both Android and iPhone have there own intelligent assistants;

Both are powerful, but Google’s intelligent assistant makes your life more easy as compared to our beautiful voiced Siri. Though Siri is evolving with every new iOS release, Android’s virtual assistants are way ahead!

Also Read: What are The Best Ways To Cut The Cost Of Mobile Application Development?

If you get a chance to customize your phone, then you would never let it go!

Every Android mobile making company can customize their phones by using the phone’s specific customization tools. Apple, on the other hand, completely limits a user from the customization.

Not only this, but you can’t even customize the default apps on the iPhone!

To sum it up, I would say Android is another name for flexibility that provides high-quality user experience and is easy-to-use.

Now, this doesn’t mean if the iPhone isn’t flexible! iPhone’s UX is pre-built and so secure and intuitive, that you would not feel any need to customize. And if you are interested in the customization, then you will have to hire iPhone apps development service provider company in the USA.

In the early iPhones, the need to recharge the battery was an everyday task. But, with the improved version of iOS operating systems, software and hardware architecture, the iPhone greatly improved battery life!

Furthermore, Android has also been to the same stage where the battery situation was complex. But, today Android phones offer ultra-high capacity long-lasting batteries.

Additionally, an Android battery delivers better performance than the iPhone.

If you're looking for big screens, then you must choose Android. At present, a trend is going on where people are liking super-sized smartphone screens, quite equivalent to a tablet’s screen. This has coined a new term PHABLET, which is a mixture of tablet and phone for the big screens.

In Android, you can get a 6.3-inch long screen, while the iPhone offers a 5.8-inch screen.

Hence, if the screen size matters you a lot, then go and buy an Android mobile phone.

As long as you've access to the internet, a smartphone functions properly! With the help of in-built GPS functions, you can easily find your phone if it gets lost. Both iPhone and Android have a strong GPS functioning.

Apple Maps and Google Maps both function at the different platform and their experience are roughly identical.

iPhone is synonymous with elegance and simplicity. Additionally, the maintenance is done only at Apple’s authorized service centers. On the other hand, Android is a bit complex and less elegant.

But, the user maintenance of Android is better can be done on any mobile service center. However, I would say suggest to always give your smartphones to authorized centers of mobile companies.

You can find many iOS & Android app development company in USA from where you can take the help of services like app development, mobile software maintenance, and many more!

The 21st century now runs on wireless internet. To access the internet fastly, you need 4G LTE networks. When 4G LTE first came to our human society, Android phones were the first who offered it.

Since then we are experiencing blazing-fast internet speed on our Android phones!

But, Apple introduced 4G LTE on iPhone 5 in 2012 and then made it subsequent for its all models. Today, high data speed is everyone’s demand which is being positively fulfilled by both smartphones, Android & iOS.

(IT'S A TIE BETWEEN ANDROID & iOS)

If you care about the security of your smartphone, then you must buy an iPhone.

In one study, it was found that 97% of all malware, viruses, worms, and cyber attacks occur mostly on Android, but not on iPhone. However, this doesn’t mean that the iPhone is immune to such attacks.

Both smartphone platforms are working pretty well while preventing malfunctions. However, if some major errors/issues occur in the operating system, we all seek help from the support department.

Both platforms support services are great; however, Apple is an inch ahead due to its standard service centers. Also, you can hire iPhone App Developers in USA to make some changes in the apps.

On the other hand, Google doesn’t provide any specific Android service center, though there are many dealers.

Final Difference Between Android And iPhone!

The decision of buying any phone depends upon your own choice now!

All the features of Android and iPhone when analyzed properly, one would come to the conclusion that both are almost equivalent. But, the iPhone is expensive, and Android isn’t!

Owning an iPhone is tougher, but in replace of it, Android gives you a more convenient experience!

If you are more particular about the technology, then I would recommend you to guy for the best Android phone in the market.

“At the half rates of iPhone, you can easily buy a good Android that can provide you 80% of iPhone’s features. In USA, 60% to 70% of people use the iPhone! Thus, iPhone is for those who can afford to spend thousands of dollars in one shot!”

Both mobile operating system platforms fulfill different sections of people. Whichever device you pick between Android vs iPhone, remember that it should fulfill your demands.