ASP.NET vs ASP.NET Core: Which Is Best To Build Web Applications? 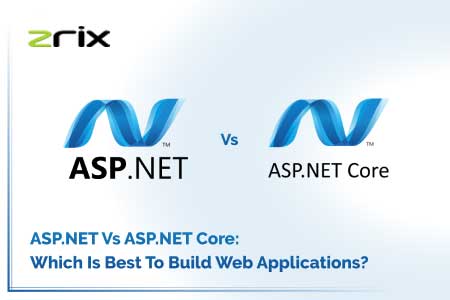 The best way to learn anything new in technology is by comparing it to its older version. This brings a better holistic view of technology and the changes it underwent.

Additionally, the comparison also tells more about the needs of customers. How can it be fulfilled?

Here in this article, we have compared the ASP.NET MVC vs ASP.NET Core by simply put both framework’s features on the scales such that it becomes easy to find the answer to the two main questions;

What is the difference between ASP.NET and ASP.NET Core?
Which one should you choose to build your next web application?

The article also talks about the pros & cons, limitations, and future aspects that can help you to make a final decision to choose the best one.

It is said that the new .NET framework is more secure, scalable & can benefit you with more achievements in website development. Today’s web development world looks forward to developing web applications that are Cloud-ready, secure, scalable, and flexible.

Therefore, today we have decided to compare both ASP.NET frameworks. But, before that let’s have a small introduction about the .NET framework.

What Is ASP.NET and ASP.NET Core?

ASP.NET released in 2002 is a fundamental web development platform that easily creates websites, applications, and web services by integrating HTML, CSS, and JavaScript. It works on HTTP commands and protocols.

While the ASP.NET Core is a newly refined version of ASP.NET framework developed and released by Microsoft. It is an open-source website development framework that runs on operating systems like Mac, Windows, and Linux.

“Though it was launched as ASP.NET 5, later on, was renamed to ASP.NET Core.”

Between ASP.NET MVC vs ASP.NET Core, ASP’s core framework is a cloud-based cross-platform framework, also known as a single web programming framework is the combination of MVC and WEB API.

ASP.NET MVC vs ASP.NET Core: What To Choose?

If you are a professional website builder and are looking to build a new website or application, you have to choose one of them based upon some scenarios.

Below we have discussed what to choose and when to choose;

ASP.NET Core is chosen when you:

• Want to target your web-based app on Windows, Linux, and Mac.
• Are interested in building a new kind of web application.

ASP.NET MVC is chosen when you:

• Have no need for cross-platform support for your web application.
• Want a stable app development environment
• Want to extend the functionality of your existing web application

In case you are a beginner of ASP.NET, then we would suggest you go with ASP.NET Core as it has the versatility and more options to choose for web applications.

Also, you as a fresher can join any top asp net mobile web development company in the USA and learn more under the guidance of professionals.

Differences Between ASP.NET and ASP.NET Core!

CROSS-PLATFORM SUPPORT: ASP.NET Core supports cross-platform framework in the Cloud environment to develop applications for any operating system. While the same isn’t possible with ASP.NET Framework.

WEB STACK: ASP.NET MVC 5 gives the option to choose MVC, Web API, or both while developing a web application. But in ASP.NET Core there is a single aligned web stack of MVC and Web API.

PROJECT STRUCTURE CHANGES: If you see ASP.NET Core MVC solution explorer on the right-hand side, there is no Web.config, Global.asax.

Then how it deals with configuration settings, authentication and application start specific code execution. appsettings.json, custom configuration files are some files that do those work of missing files from ASP.NET MVC 5.

A new approach to Server-side and client-side dependency management of packages.

Any .NET developer would be familiar that References folder holds all DLLs, NuGet packages for particular .NET Framework. Leverage the experience of working in Visual Studio IDE and deploy ASP.NET Core applications on the operating system.

Its Server side management of dependencies. Client-side dependency management is more important because the client-side has more different packages from the server-side.

They are part of “Dependencies”. 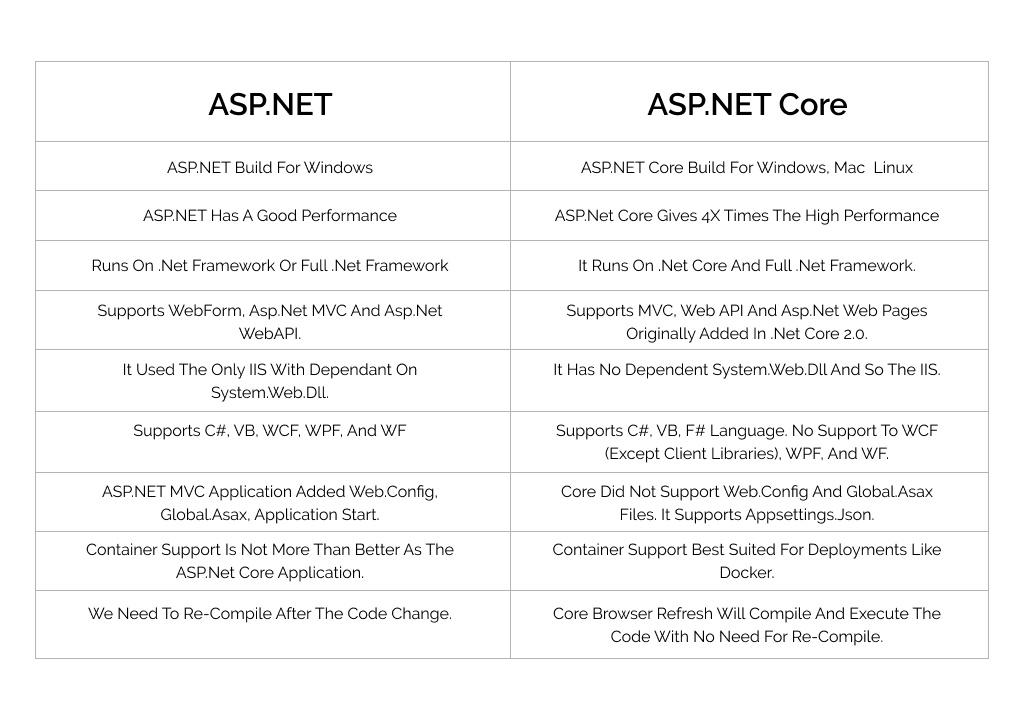 These are the primary differences between ASP.NET and ASP.NET Core. You can find more difference if you Google “ASP.NET core vs ASP.NET framework.”

However, if you know these many differences then yes you can migrate to ASP.NET Core from the older ASP.NET framework. At least we would say that you would easily explain the differences between both whenever you sat in an interview of a top dot NET software development company in USA!

If you feel that ASP.NET Core is a better framework to build website applications for Windows, Mac, and Linux, then you can contact us and make use of our low-cost under-budget ASP.NET to ASP.NET core migration services.

Also, we request you to give us your valuable feedback in the comment section below. And if you have anything more to say on ASP.NET vs ASP.NET Core, then you can comment down to open a discussion.