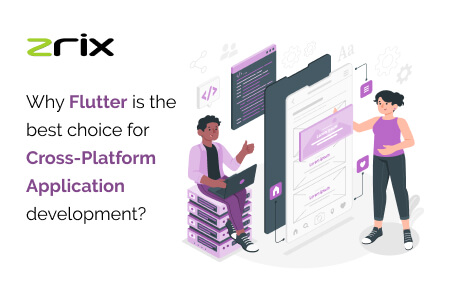 What is a Cross-Platform App Development

Flutter is such a framework that is used to develop an application using a single codebase It enables the developers to develop applications for multiple platforms like Android and IOS. Not only Android and IOS but flutter also support some other app developments. Like web apps and desktop apps. It uses the same codebase for developing all the applications. It is capable to develop computer applications for Windows, Linux, and Mac operating systems. Flutter uses dart programming language for app development. Flutter is now used by top brands like eBay, Alibaba, etc.

Flutter works using different widgets. These widgets are used to add the features of object-oriented programming languages. These widgets are customizable entities. That one can use to add functionality to any application whether it is for mobile, web, or desktop. This is the only functionality that makes app development much easier in Flutter. That is why we have seen growth in the number of Flutter app development Companies in USA.

In this article, we will discuss the Flutter app development platform. How this platform is useful for developers that are working on a project of cross-platform app development.

Hot reload for faster testing: This is one of the biggest advantages of the flutter app development platform. This platform easily compiles the program and displays the results to its users. Flutter has a hot reload option that is used to immediately display the changes. This feature enables testers to perform rapid tests on the program. This rapid testing saves the time of both the developers and application testers. With the help of the hot reload option one can easily make changes to the application. These changes can be easily and rapidly visible to developers.

Less amount of Code: Flutter is such a platform that is capable of developing an application using a less amount of code. Developers are not required to write lengthy code to make an application highly dynamic. Flutter basically works on the Dart language. This is an easy language that consists of the features of object-oriented programming languages. The application developed using such features will be highly dynamic and feature-oriented. It is a very simple language that one can easily learn. If you are not having knowledge then you can also hire a cross-platform app developer.

Single Code for multiple platforms: Using the flutter app development framework. One can easily develop the same application for multiple platforms. Using a single code you can develop apps for both Android and IoS. Flutter even allows you to develop desktop applications. It removes the requirement of performing multiple coding for developing cross-platform apps. It will save the time and effort of all the developers.

Flexible Customizations: It is one of the advantages of flutter which has increased its usability. It provides developers with a lot of customization options. These customizations can also be made even after the app is developed and implemented. It totally works on the user-oriented approach. These are one of the uses of cross-platform mobile apps. These features allow easy customizations to the applications developed for both platforms.

Cost-effective: If you are an app developer then you must know. Developing the application for multiple frameworks separately is a costly process. This process includes a lot of resource utilization that will cost a lot to any individual. To save such costs one can use a cross-platform app development framework. Amond different framework flutter popularity graph has reached its highest position. It is one of the feature-oriented app development platforms. Its popularity ratio has defined flutter’s future scope. It saves the cost, time, and effort that are indulged by the developers in developing an application.