Does Flutter Marks the Beginning of Next-Gen App Development 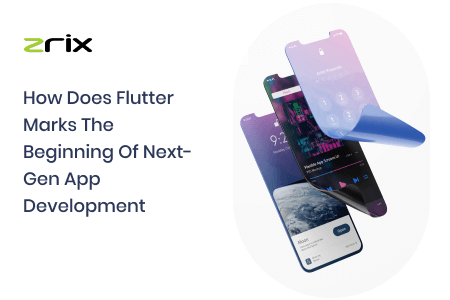 What is Flutter, and how does it work?

Flutter made its debut during the 2018 Mobile World Congress, which has react-native future scope. It's Google's creative foundation for building cross-platform apps. Even though it is a new release, it has begun to gather traction, with many companies around the world adopting its single codebase SDK to port their existing cross-platform products. The demand for flutter development is growing, but there aren't enough vendors to supply it.

Only a few firms have succeeded in providing clients with a faultless cross-app development solution utilizing flutter. Finding a dependable flutter app development firm for people looking for quality in their mobile applications is still a difficult issue because it is a perfect platform for developing mobile apps. There are only a few firms to look forward to when it comes to the most dependable flutter app development companies. With their skill-set and experience, they have earned a reputation for providing the highest service quality and flawlessly catering to their clients' needs.

Before flutter, cross-platform app development was never so easy and simple. Flutter is preferred by most businesses because it eliminates the need to design separate apps for iOS and Android. A successful app can be produced with just one codebase for both platforms.

Why is the Flutter Framework the most popular?

If you have a team of experts, there are several advantages to utilizing Flutter as a next-generation of App Development over competing frameworks. Here are all of the features that make Flutter such an attractive framework.

It takes a lot of time and effort to test an Android or iOS software after it has been developed. Following that, there may be a slew of updates that further complicate the process and lengthen the time it takes to develop an app. But it's all because of Flutter!

When you update Flutter, you may use the hot reload functionality to see the changes right away. It saves you time, effort, and money while shortening the time it takes to develop an app.

Also Read: How To Choose the right database for your Flutter app

App developers will be able to create an application with a single codebase. It also contains a portable GPU that enables it to function with a variety of interfaces. It takes less time to grow. What else would a developing need to fall in love with a framework? Flutter is the best choice for developers because of all of these capabilities.

Flutter does not skimp on quality, and its development frameworks are more efficient and faster than those of competing platforms. To fulfill their objectives, the developer does not need to write any specific code. Flutter allows developers to create 2D-based user interfaces.

For the development of two applications, just one codebase is necessary. You may use the same code to develop Android and iOS platforms. Because it has its designs and widgets, Flutter is not reliant on the platform. As a result, you can develop the same program for two different platforms.

Widgets appear in a range of sizes and shapes. Flutter apps are more appealing and distinctive.

Speed is crucial in a highly competitive environment. The usage of cross-app development solutions shortens the time to market, allowing for a quicker distribution of the finished product and consumer feedback. The software is available on two mobile operating systems at the same time – iOS and Android – and performs like a native program, which is robust and reliable.

It is well recognized that the application's release is only the beginning. The application's maintenance can be more complicated, time-consuming, and financially unprofitable than simply constructing the end product. Flutter's apps also tackle this issue: bug fixes and additional features can be added to the app quickly. Furthermore, adding a new person to your team is simple because you only need one specialist, rather than two — one for each operating system.

Flutter's cost-effectiveness is a significant benefit for businesses. Whereas it was necessary to employ two teams to develop native Android and iOS apps, it is now possible to do it with just one. For Flutter app development, a company can hire an IT service provider, hire freelancers (more ideal for startups), outsource, or hire mobile app development service providers. As a result, producing a Flutter app is less expensive in terms of money, time, and materials than developing a native app.

The requirement to incorporate new code into an existing platform or collection of applications can make developing new applications difficult for businesses. Because of Flutter's versatility, it's simple to integrate it into native application code. Many firms do exactly that: they use Flutter's capabilities to develop part of the code, then apply it and evaluate the benefits. They progressively migrate the remainder of their items to Flutter after becoming convinced of its profitability. As a result, the transition to cross-platform development is happening more gradually and with less pain for businesses, and Flutter's benefits are only growing.

Companies must build an immersive user interface that enhances the consumer's experience and loyalty, with an emphasis on the end-user. For this, Flutter is the best mobile app development framework option. Flutter uses the Skia graphic engine to provide developers – and businesses – with a wide range of tools for designing apps. Furthermore, you simply need one design that works on both iOS and Android.

Flutter's UI is more expressive and adaptable because of its vast selection of tools and widgets. Because of the layered architecture, the UI renders faster, resulting in more personalized and stunning designs.

A flutter is a great option for organizations and developers who want to ensure that their apps are future-proof. Flutter is projected to be the most popular platform for developing mobile apps in the future.

Flutter lowers your company's risks. As a result, Flutter can justifiably be considered your first choice when designing mobile apps.

You can also hire a dedicated Flutter developer to help you with your needs.