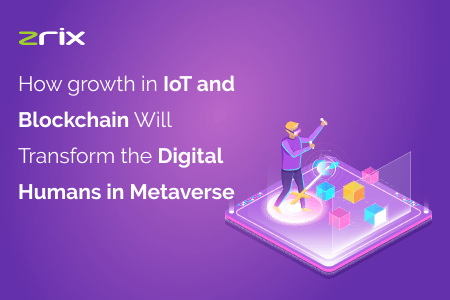 Since it is the latest technology so the improvisations are still going on. They are trying to integrate metaverse with some other technologies like IoT and Blockchain to enhance their capabilities.

Since Metaverse is such a vast platform so it also needs a real-time and vast storage space. Not only the space but also the connectivity of a network that consists of software, sensors, and also some integration of some other technologies.

In this blog, we are going to discuss the different aspects of how IoT and Blockchain technology are improvising digital humans in Metaverse.

IoT or the Internet of things is one such technological advancement that helps us to integrate a particular technology with sensors, System software and can also integrate it with other technologies as well.

Today We are using different gadgets that consist of different sensors and can be operated using particular system software. That system software is further integrated with some other technologies.

IoT and Metaverse when integrated together can easily transform the digital world. It will definitely provide its users with a separate platform. So that people can easily create their avatars and can just operate them like in the real world.

There are several IoT software development companies that are also looking to integrate IoT and Blockchain technology. It will transform the digital world by providing a real-time storage platform for it.

Blockchain not only provides data storage but also provides security to the real-time data of Metaverse. Using this you can easily keep track of your previous records.

Blockchain technology is just like a ledger in which one can store different transactions. These transactions can be performed by any of the users over a digital platform. Blockchain technology collects real-time data and further processes it. After the processing of data is completed it stores the data in the form of small blocks. It is termed one of the most secure forms of data storage. Using such a platform the data once stored cannot be deleted at all.

Since Metaverse is such a vast platform that consists of a digital world the same as the real one. It requires an equally vast platform for collecting and storing real-time data. Metaverse also requires high security that is only offered to this platform by blockchain technology.

How IoT and Blockchain transform the Digital Humans in Metaverse

Also Read: Blockchain Is A Key Technology For The Metaverse to NFTs

Most game development companies are also using Metaverse for developing realistic games for their users. Those realistic games are most liked by users that consist of high quality and support virtual reality.

Metaverse is one of the vast platforms that can be used in a wide range of sectors. Digital humans are powered up with artificial intelligence so that they can automate all the operations as real humans do.

For integrating Metaverse with Artificial intelligence and a particular system software we need IoT. It basically establishes the connectivity amongst such technologies and Metaverse so that real humans can easily operate them using a particular application or software.

Since digital humans are the most necessary elements in the metaverse. Without this, these users can’t perform any of the operations.

IoT is not only used to integrate Metaverse with such technology. It is needed to establish connectivity between Blockchain technology and Metaverse.

Basically, as we have discussed above Blockchain is just a storage platform. It records all the real-time transactions that a digital human can perform. This transaction can be anything like the operations that are performed by digital humans.

In Metaverse, you can purchase digital assets also. NFTs are the best example of digital currency. These tokens are further used as cryptocurrency in the virtual world for performing transactions.

Metaverse is also contributing to the healthcare sector. It reduces the need for the physical presence of the medical staff. So when they are unavailable you can communicate with their virtual avatars to get the desired solutions.

All these operations have become successful just because of the integration of IoT and Blockchain technology with the metaverse. For performing all such operations there is a lot of importance on Blockchain and IoT in Metaverse.

The advancements in both these technologies are widening the scope of Metaverse. With the help of digital simulations, one can easily create real-life experiences in the Metaverse. There are a lot of benefits of the internet of things and blockchain technology in Metaverse.

With the use of both, these technologies humans can easily discover various possibilities in different sectors and can easily cope with anything in the upcoming future. It can even help us in managing all the disasters that will be occurring in the future.