Blockchain Is A Key Technology For The Metaverse to NFTs? 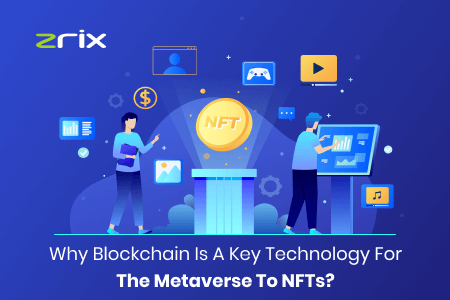 What is Blockchain Technology?

Blockchain is a technology used for recording different forms of transactions. These are completed by different users on a particular application or a website.

Blockchain consists of a set of blocks in which it is storing the transactional data of different users. These sets of blocks are interrelated or connected with each other.

Blockchain is one of the most secure forms of data storage. Users can also track the stored data using blockchain technology.

Today every business is having different forms of necessary information which are needed to be stored.

To store the information which the business consists of they use Blockchain technology.

Metaverse is a platform or you can say it is a 3D virtual platform that focuses on Social networks or social connections. As we all know that Facebook is now converted into Meta. Metaverse is a technology that focuses on Augmented reality and Virtual reality. for keeping the records of transactions and tracking them. Blockchain is one of the key technologies powering the Metaverse. Blockchain technology is one of the key aspects of the metaverse used to build a Metaverse.

NFTs are termed as Non Fungible Tokens. These are the Cryptographic token based on blockchain technology. It is used to represent all the tangible as well as intangible assets. It is used in Buy, Sell, and trade processes. These tokens consist of particular unique identification codes. These tokens also can be used for different purposes so Metadata is used to represent its purpose. These can’t be exchanged and traded like cryptocurrency.

Role of Blockchain in developing Metaverse

Characteristics of the Blockchain Technology

There are different characteristic features of Blockchain technology which are mentioned below:

Immutability: Blockchain development is one of the immutable technologies. It means that the data inside the database in which blockchain technology is used can’t be altered. Also, only valid details of the transactions can be added to the Blockchain network.

Transparency: The data in the blockchain network is completely transparent so each user has a copy of all the records. That copy consists of different transactions. It is also known as the distributed system which leads to the higher accuracy of records. As we have discussed that blockchain technology only enables valid data to be inserted into the network. That's why it improvises the data's accuracy and validity.

Independency: Blockchain technology is an independent system that does not have any authority. This technology makes unbiased decisions that are error-free. This characteristic makes it error-free and also it is not at all based on Human-based calculations.

Security: Blockchain technology is considered one of the most secure systems. It is used in the Cryptocurrency software. This system is encrypted so only authorized users can access it and make changes. The Blockchain consists of a set of blocks and each block is separately encrypted.

The importance of the Metaverse is described as follows:

Improvise communication: As we have already discussed that Metaverse consists of both AR and VR. It is used for Social connectivity. Using metaverse people can communicate with each other. Communication is possible using 3D Avatars which can symbolize your profile picture exactly. Due to metaverse users can communicate using social media channels more effectively.

Virtually display reality: Using metaverse one can experience the real world virtually. It is possible with the help of augmented and virtual reality. You can also perform real tasks virtually using metaverse. The functioning of the metaverse leads to let you have a look at the real world.

Challenges of the metaverse

There are several challenges in deploying metaverse that is described below:

System requirements: as we have discussed earlier, metaverse requires a high specification system. These systems are able to perform a lot of tasks. These are capable to operate with VR, AR, and other peripherals which support virtual reality. These are one of the costliest hardware systems that everyone can’t afford.

Security Issues: There are several security issues in Metaverse. Metaverse will be storing all your personal information so there is a higher chance of data breach due to vulnerabilities.

Lack of Interoperability: There is a lack of interoperability among different platforms. Metaverse requires the same systems to be there or at least the systems should be compatible with each other. It is used for error-free communications.

Role of NFTs in Metaverse

We have already discussed NFTs which are used to represent Non Fungible tokens used to represent Real tangible items. The role of NFTs in the Metaverse enables people to get or own real assets virtually. NFT will work as a registration of your physical asset in the name of its buyer virtually. NFT is based on blockchain technology. It enables the storage of all the records of the user who is owning that particular physical asset. You can virtually access that asset using Metaverse.