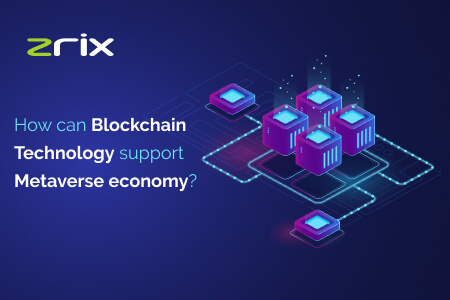 According to the name, it distributes the data in the form of modules that are connected through a chain. Blockchain technology consists of the most advanced data collection and storage methods. It is one of the most secure data storage platforms used mostly for bitcoin transactional software. The main thing that makes it more advanced than the normal database is the method of structuring the data.

The blockchain effectively collects the data and stores it using a new block. This block is further connected to the networks. All these blocks are interconnected with each other.

Once the data is stored in the blockchain it can be accessed but can’t be deleted. This is the reason why Blockchain is playing a crucial role in the Metaverse economy. To use the blockchain in the metaverse, you need to develop a blockchain application. These applications can be easily developed using Blockchain integration services. These services are capable to fulfill all the requirements of clients. Several companies are offering blockchain development services provider in the USA.

Metaverse is a process of creation of a 3D and virtual world creation. It consists of 3D avatars that function almost like humans. In other words, Metaverse is a 3D world that can be seen virtually using AR and VR headsets. This virtual world can be controlled using your eye movements or even with commands. It just looks like a 3D popular VR real-life game. Metaverse is launched by Mark Zuckerberg founder of Facebook. Using this technology one can easily create 3D avatars. Just because metaverse is capable to store such a surplus amount of data that cannot be deleted. For fulfilling the requirements Blockchain integration services have been used.

Also Read: Blockchain Is A Key Technology For The Metaverse to NFTs

What Is Metaverse Economy?

We all know that metaverse is the virtual world. Every world has its own economy. You may have heard about the NFTs. These are named Non Fungible tokens. NFT is basically a concept that is used to act as virtual assets. One can easily perform investments using the NFTs virtually. NFTs act similarly to cryptocurrencies. Cryptocurrencies are fungible assets whereas NFTs are non-fungible ones.

NFTs play a major role in the metaverse economy. Even people can also purchase cryptocurrencies using the metaverse. To record such transactions with security blockchain technology is used. In the metaverse, you can easily buy and sell different assets as well as you can create your capital. This process involves the exchange of currencies. Noth the real ones but the virtual ones. That’s why both the crypto and NFTs are part of Metaverse.

There are several cryptocurrency software developers that are working on this project. It involves the development of such an application using which one can perform virtual transactions. These are further supported by blockchain technology. Metaverse and blockchain-based products needed virtual transactions.

How blockchain is supporting Metaverse Economy?

We have discussed several aspects of both the metaverse and Blockchain. Now we will discuss how blockchain technology is helping the Metaverse economy. We all know that blockchain technology is mostly used in cryptocurrency software. If the metaverse helps in creating a virtual world then the world will have its economy too. The economy consists of transactions that involve the purchase and sale of assets. These assets are virtual that’s why these can be purchased using a virtual currency.

We all know that the metaverse economy will be the most successful economy in the upcoming future. In this economy, real people can perform different transactions virtually. They can even convert this virtual transaction to a real one. For maintaining such huge data Blockchain is the most necessary platform. It can effectively collect the data, structure it and then store it. One cannot delete the stored data from Blockchain technology.

In this Blog, we have read all the aspects of metaverse and Blockchain. We have seen that blockchain technology is playing a major role in the virtual world of the Metaverse. You all know that if we are creating a world virtually then it will have its economy also. For maintaining such an economy and maintaining all the virtual transactions blockchain technology is used because of its effective features.