Which is Better for Android Development - Kotlin Vs Java? 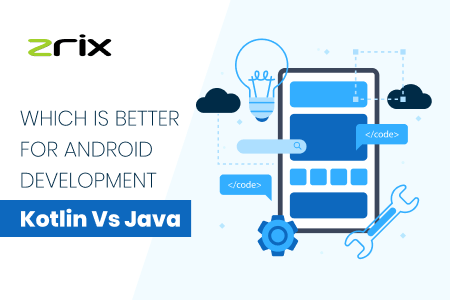 JAVA is the undisputed programming language for a long time, but Android has always been wanting a cutting edge language. For this, KOTLIN came into existence! Today, Kotlin is now known as the official language for Android development.

Many top mobile application development companies in USA to date confuses in between mobile app programming languages. While java programming is the oldest, the Kotlin is said to be the best.

Thus, in today's blog, we are going to discuss on Kotlin vs Java. Also, we will tell you how Kotlin with Java operators can work well in app development projects?

So, the question is, should we replace Kotlin with Java or not? Well, it depends on individual preferences, but we had our answers at the end of the blog. However, before you or your company make any changes, it is a must to understand the two programming languages.

Kotlin is a new modern feature-based statically typed programming language, which is a good choice to develop server-side applications and allow users to write and expressive codes concisely. Kotlin is developed by JetBrains.

Let’s go and dig deep to find which one of them is best for the Android operating system. Is it Java for Android or Kotlin for Android?

Understanding Everything on Kotlin!

JetBrains integrated all the development environments including the Java mobile environment to give a new one named Kotlin.

Kotlin is a statically typed open-source language in which you can compile JavaScript using JVM - Java Virtual Machine to build code that can easily run on iOS. For this, you just have to install the Kotlin plugin.

Next, you have to configure your project!

Understanding Everything About Java!

Java is said to be the most valuable, required, and must language of developers in the Android app development. It is because Android OS itself is written using Java.

Sun Microsystems which is now Oracle’s property developed Java, an object-oriented programming language around 20 years ago!

And its popularity only seems to grow beyond horizons because of the following advantages:

Kotlin vs Java: Which is Better?

The advantages of Kotlin over Java are that Kotlin is interoperable, concise, has an easy learning curve, and provides enhanced run-time performance.

But, the advantages of Java over Kotlin are that Java has a higher compilation speed, Java's community has the world's best experts in it, and have strong libraries which are even used by Kotlin. You can use the features of Android Studio in Java versions.

Why use Kotlin for Android?

We know that Java is working fine for Android. What is the point in making a shift from Java to Kotlin in the Android app development?

The most critical thing to understand here is that Kotlin is designed to address issues of Java. Nowadays, Kotlin provides an important safety mechanism as it is far more concise, out-of-the-box, and expressive than Java.

“At the same time, Kotlin comes under the top five languages used and exercised by the developers. This new language Kotlin is at number 4 after Rust, Python, and Typescript!”

Since 2018, 1.5 million developers are writing codes for app development in Kotlin. It is enough to tell about the superiority of the leading programming language for Android. Not only in the Android OS, but Kotlin is also used in making iOS apps.

If you have plans to develop iOS apps in Kotlin, then hire an iPhone app developer in USA from us. Our developers know how to use Kotlin for Android and iOS!

From the above discussions, what we now know is that Kotlin offers more advantages than Java. However, Kotlin has many shortcomings though Kotlin has powerful features just like Java.

If you are planning to use Kotlin, then try giving one-month minimum time to you for becoming familiar with Kotlin as it is not easy t learn Kotlin.

Hence, our answer is NO, Kotlin can't replace Java!

They both bind together in a splendid manner to give a more improvised version for the practice of Android development. Our final conclusion is as follows:

“If you're a beginner and enjoy challenges, we recommend you to use Kotlin, especially when you are working on some innovative project!”

As a beginner mobile app developer, it is best to experiment with Kotlin. It is a new language and might give you tangible benefits.