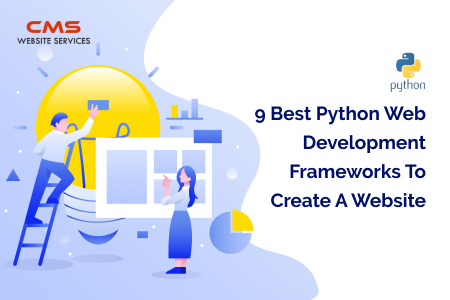 Python is a high-level language with dynamic typing and interpretation. Moreover, being a leading programming language in the website development industry, its foundation is still based upon the concepts of OOPS - Object Oriented Programming System.

Due to its unique syntax, it looks different from other languages like C, C++ & Java. Also, Python is easy to learn language.

Most developers use Python development frameworks to create websites and develop applications. Additionally, the Python frameworks provide a defined structure to the dedicated web developers as the focus is entirely on the core logic rather than elements.

In order to create a website, you need a platform or framework where you can code, customize, and integrate third-party as per the complexity of your applications. In this article, we will discuss some commonly used Python frameworks for web development.

Thus, the list below comprises 9 Python web development frameworks into two different categories as follows. Let’s get started and learn to create a website by using Python frameworks.

Django is an open-source free-to-use Python framework that was released on July 2005. As compared to other frameworks of Python, PHP, etc. it creates complex code websites and applications in less time more easily.

With a model-view-template architectural pattern, it follows DRY (don’t repeat yourself) principle. Django has a wide collection of Python libraries, and its focus is more on efficiency, less coding, and reusability of modules, components & packages.

Django supports databases like PostgreSQL, MySQL, SQLite, and Oracle. Thus, Python website developers are able to transfer the code from one database to another.

Web2py is a cross-platform web application Python framework, which is by nature open-source and free-to-use since its release in September 2007.

Users can easily create dynamic web content in Python if they use Web2py. It comes with a code editor, debugger, and deployment tool, as well as tests and maintains applications.

The above two web development frameworks in Python are commonly used by Python Development Services Company in USA.

Developed by Mark Ramm and KevinDangoor, the TurboGears python framework for website development is an open-source, free to use a data-driven framework.

TurboGears components like WebOb, Genshi, SQLAlchemy, and Repoze easily develop those applications which need immediate and faster database connectivity in comparision to other frameworks.

Also, TurboGear Python development framework has a web server gateway interface that enables all the web developers to include complex widgets in their applications.

It is one more open-source free to use python framework to learn website development based upon the data model. Developed by Logilab, you can use it in place of separating views and models.

Multiple cubes join each other to create some configuration files, a database, and a web server. Some CubicWeb Python web development frameworks are as follows:

Apart from all this, Giotto contains controller modules that enable the users to create websites and applications.

Pylon is a lightweight Python web development framework that was developed in December 2010. It majorly emphasis on the rapid development of applications and also follows other languages like Ruby, Python, and Perl.

These full-stack Python frameworks in web development are widely used by full-stack dedicated web developers to complete their projects on time without any delay.

The non-full-stack frameworks never provide additional functionalities and features to the users. Therefore, it becomes important to hire Python developers who are knowledgeable and can add more code manually.

The bottle is a Python microframework for websites that were developed by Marcel Hellkemp. Being an easy-to-use lightweight framework, it generally builds small web applications and creates a single source file. Moreover, it is completely dependent on the Python Standard Library. Some basic Bottle framework features are:

Remi Delon founded CherryPy open-source, object-oriented Python framework, which has its own multi-threaded webserver to create web applications. CherryPy applications run on any Python-supporting operating systems. Some CherryPy features are as follows:

Sanic is also an open-source Python framework that is comparatively faster than others. Moreover, it is specially designed for quick HTTP responses. Sanic has a remarkable record to process 33,342 requests in a second. Each non-full stack Python, web development framework, has some pros and cons at different development stages.

We hope that you found our lists of both types of Python frameworks valuable, and you are looking forward to learning each of them in order to become a successful developer in some best web development companies in USA.