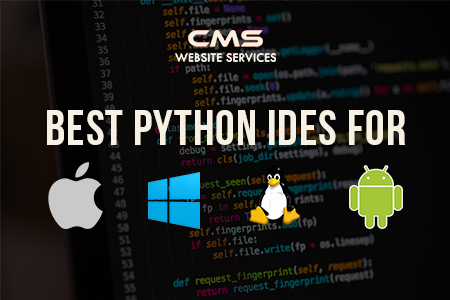 Python is a general-purpose programming language that helps in building almost anything such as Python for web development, software development, data analysis, application development, artificial intelligence, and game development.

Let’s suppose you want to write a program on Python; you’ll first need text-editors like notepad, notepad++, sublime or vim editor. To run these programming language text editors, we use command lines, then compile the source code, run it and check whether there is an error or not.

Writing, error finding, again writing, debugging, etc. makes text-editor a time-taking task. On the other hand, a Python IDE is a software which contains code editors, quick build automation tools, a debugger, a compiler, and an interpreter at one place.

Thus, using an IDE saves a lot of time by automatically completing the code and checking syntax. There are several Python IDES in 2019 that works on almost every platform.

It is difficult to pick one best Python IDEs for Mac, Windows, Linux, and Android because every single IDE will have its own advantages, disadvantages, features, and drawbacks, etc.

So, we have compiled a list of best Python IDEs that enhances your python development experience. Every web development company use the below IDEs and try to automate the development process as early as possible.

Moreover, if you are new to Python language, then these Python IDEs for beginners will suit you well to build anything. So, let's get started to the best Python IDEs for Windows, Mac, Linux:

Pycharm Python IDE developed by Czech company JetBrains supports Windows, Linux, and macOS. Its community edition (first one) is free while the professional version is paid.

The paid one in addition to these features includes Scientific tools, python profiler, Database & SQL support and Remote development capabilities.

However, if you want to learn Python, then Pycharm Educational Edition is best to teach or learn Python development services.

It is an open-source IDE that supports cross-platform on all operating systems wherein used for Scientific programming with Python Language.

Spyder IDE is one of the best Python IDEs for machine learning and can be used in Data Analysis, MATLAB, RStudio, etc.

“We can’t say which of these Python IDE is best! If you’re new to a Python programming language, then use Pycharm Educational Edition or Spyder IDE for scientific programming.”

PyDev: Not A Python IDEs For Mac, Windows, Linux, and Android

PyDev is not an IDE but is a plugin (third-party) for Eclipse used in JAVA and Android. It is fully functional and supports CPython, IronPython, and Jython.

It's a professional IDE with high customizability and flexibility with an intelligent editor and powerful debugger. It enables the process of development fastly and accurately.

It supports project management and has become popular among Python developers and Python web development company. Moreover, its extensive features have let many users prefer it over PyCharm.

So these are the some of the widely used best python IDEs for Mac, Windows, Linux, and Android which offers featured Python development environment correctly.

In Python web application development, IDEs can make a big difference in terms of programming experience. Since, it is used in building software, web application, mobile application, etc. you must hire dedicated developer for your business or project who understands all these Python IDE.

How To Create Mobile Apps For Your Business: A Complete Guide