8 Python Libraries That A Data Scientist Must Know 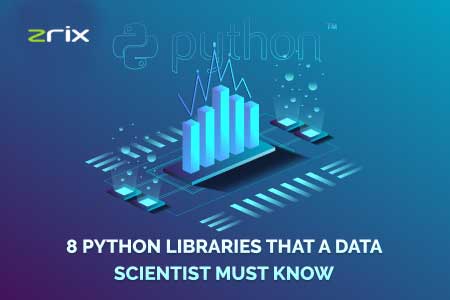 Python is a high-level, interpreted, general-purpose coding and programming language that was created by Guido van Rossum with its first release in the year 1991. Python design emphasizes more on the code readability with the object-oriented approach such that a programmer can write clear and logical codes.

Python interpreters are easily available for all types of operating systems and are well-maintained by the global community of programmers.

Python can access data instantly. For this purpose, this programming language has many libraries that are helpful in AI, ML, deep learning, and data science.

Python is a data scientist's most popular language and software developers use it to handle data science tasks. It predicts outcomes, streamlines data processes, automates tasks, and gives you insights into your businesses.

Using Python you can work in business predictive analysis!

The more you interact with Python developers, Data Science Experts, the proficiently you understand this language well. Python programming language is an asset to have in your skillset.

Since all Python libraries for data science works differently, we have decided to introduce some of them to you. The below list will definitely make you a good user of Python particularly in Data Science, Artificial Intelligence and Machine learning.

However, just knowing them isn’t the solution, you need to practice these libraries into your coding and development field extensively. Let’s get started:

To perform data wrangling, manipulation, reading, aggregation & visualization, Use Pandas.
This library takes data into a CSV/TSV file, SQL database, and create python objects in a data frame. The library works like statistical software such as Excel or SPSS.

How Pandas Is Helpful?
• With Pandas, you can index, manipulate, rename, sort, and merge data frame
• Also, you can update, add, delete rows and columns in a data frame
• You can impute missing files, handle missing data or NANs
• Data plotting is easy in histogram or box plot
• Pandas is a foundation library in Python for Data Science functions.

It is a quintessential Python library that plots 2D figures. Matplotlib provides object-oriented API to embed plots into mobile, website, and software applications. It is inspired by MATLAB.

Matplotlib easily depicts a wide range of visualizations. You only need to put a little bit of your efforts and time in the visualizations, then everything will become easy and simple.

Its main object is the homogeneous 2D & 3D array that has a table of elements or numbers indexed by the same data type. In NumPy, axes are dimensions and the number of axes is called a rank.

“Therefore, NumPy’s array class is known as the ndarray.”

NumPy process arrays storing the same datatype values facilitate mathematics operations, perform vectorization to increase the performance while speeding the execution time. Hire python developer in USA that at least has the knowledge of all these three Python libraries!

How NumPy Is Useful?

The SciPy library is one of the core packages that make up the SciPy stack. Now, there is a difference between SciPy Stack and SciPy, the library.

SciPy builds on the NumPy array object and is part of the stack which includes tools like Matplotlib, Pandas, and SymPy with additional tools.

SciPy library contains modules for efficient mathematical routines as linear algebra, interpolation, optimization, integration, and statistics. The main functionality of the SciPy library is built upon NumPy and its arrays. SciPy makes significant use of NumPy.

When to use? SciPy uses arrays as its basic data structure. It has various modules to perform common scientific programming tasks as linear algebra, integration, calculus, ordinary differential equations, and signal processing.

This library also provides supervised & unsupervised learning in Python models like Naive Bayes. For data modeling, Scikit Learn is the best Python library that provides other useful implementations such as;

TensorFlow is an AI library for the Python programmers by whose help, the developers create neural networks with large-scale layers and data flow graphs. The library helps in building deep learning models and easily deploys ML-powered applications.

It is the most advanced library of Python that is used by an AI software development company in USA.

To conduct statistical tests and data exploration in Python programming language, you can use Statsmodels Python libraries as it makes computations easy. Furthermore, this Python library makes descriptive statistics for the statistical models.

It belongs to TensorFlow, but is a high-level API when compared to TensorFlow! It is an open-source neural network library that builds a Deep Neural Network code for deep learning and machine learning tasks.

Keras helps in creating code blocks and layers that compute the loss functions in data and image processing. Keras is user-friendly, modular, composable as compared to TensorFlow!

These are all the popular Python libraries for Data Science, AI, and Machine Learning. To use this, you first must know what are your requirements and how each library can be useful to your needs.

Most of the libraries are for data science projects. Hence you must gain every essential knowledge as a deep learning enthusiast. Along with these high-level libraries, you can also learn about Theano and PyTorch that are widely used in industrial implementations and academic research studies.

But, again do learn them extensively without any hesitation.

We provide the best software developer in Raleigh, NC! To contact one, you can comment down in the below section. If you get some difficulties in learning then you can contact us anytime from anywhere by calling us!