Is React Native App Development is Cost-Effective For Startups 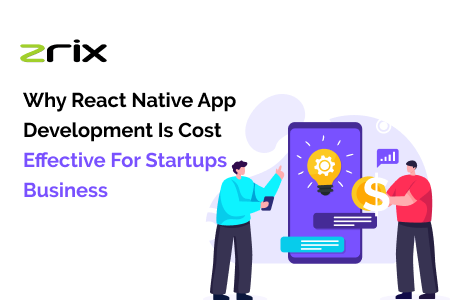 The Mobile App industry is on Boom these days just because of the growth in the number of apps. Just because of the advancements in the technology sector, most companies are shifting to mobile apps. These apps are not only limited to single platforms mostly businesses need multi-platform apps. Which are mainly iOS and Android operating systems.

Different frameworks allow multi-platform mobile app development. With which the users can easily create robust and feature-oriented mobile apps. One such framework is React native framework.

In this blog, we are going to discuss different aspects of React native technology that help users to create custom mobile apps with ease.

What is React Native Framework?

Most businesses usually the startup ones are using React native platform to develop mobile apps for both Android and iOS. The reason behind this is its robust features and functionalities like the code reusability for multiple platforms. There are several other reasons why it is one of the cost-effective frameworks for startup business Ideas.

Open source is a term used for such software or frameworks that are available and free to use. This is why most startup businesses prefer React Native as their first choice. Since react Native is a free platform so one can easily install it to their systems and starts developing mobile apps for their businesses. It is not only an open-source framework but is also the most flexible one with the robust features of Native frameworks that allows mobile apps to be accessed from different devices and even you can change the configuration of your mobile engaging lesser efforts.

One of the most popular advantages of React Native framework is the Reusability of code. This feature has reduced the efforts of different react native app development companies. This reusable code features lets these companies create apps for multiple platforms using a single code. No need to change the code for different platforms. This helps the developers in effective app management as well as creating different development strategies with ease. Code reusability also lets businesses in rapid app development as well as cost-cutting for the businesses that are looking to create their applications for both the Android and iOS Platforms.

React Native platforms provide you with a robust app development environment that let you with the easy and hassle-free maintenance of the apps created for multiple platforms like Android & iOS. React native is one such environment that utilizes all the features and functionalities of a device for the proper running of apps. So if your React Native version is updated then there is no need to update your applications frequently on Google Playstore and iOS App Store. Even the React native app developers create applications using the same code base for both applications. So these applications can be easily maintained by just performing a little bit add ons to that code.

React Native mobile apps is one such framework that is used for rapid mobile app development. As it facilitates the reusability of code so you can reuse the code to create another application with the same form of code by doing just little customizations. Even this framework supports the usability of the same code to build apps for multiple platforms. So if you are planning to build up mobile apps for your business much faster then you can choose this platform. Which supports a faster and easier development process that increases your startup success rate.

Hot reload functionality is one of the most preferred functions of native Developers. With this feature, one can refresh or reload the application while it is running during the development process. Even this feature also allows developers to access new databases and make updates during the successful run of that application. It supports the sudden changes display on the apps even when it is running. So when the developers make some changes or customizations to its user interface then it doesn’t affect any of the current states of that app and displays customization results faster. It doesn’t even compromise the app’s running speed.

Traditional software development for multiple platforms consumes a lot of resources. With the introduction of React Native framework resource consumption for app development for multiple platforms has been reduced. With React Native framework you can easily create or customize UI as well as create feature-oriented applications for both Android and iOS. Since using the react native framework you can create multi-platform mobile apps using the same set of code. Even one can create a mobile application only with a little knowledge. So there is no need to hire developers for it. Thus if you are a startup then you can save a lot of your resources which will be beneficial for you.

The modular architecture is another feature of React Native. React native framework supports application development in different modules for different sections. So if you need to make some changes to your mobile app then there is no need to make changes to the whole source code. You can just make changes in the modules of that section in which the change is required. It saves the time and effort of developers and also the costs of startup businesses.

In this blog, we have discussed React native application development framework. This framework is having a lot of features and functionalities that help startup businesses in reducing their app development costs. We have also discussed several aspects of how React native framework reduces the consumption of resources and is cast effectively. So if you are a startup business looking to create multi-platform mobile apps for your business at a less budget then you can prefer React Native Framework.