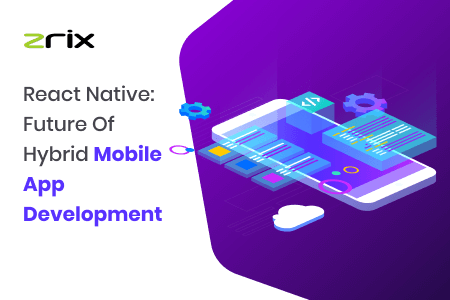 React Native is quickly becoming a popular choice among enterprises. This open-source platform has become a treasure of tools for app development, whether for startups or Fortune 500 organizations.

This platform was a revolution in the making. It spread like wildfire simply because it enabled designing hybrid mobile programming for iOS and Android viable at the same time.

React Native is a JavaScript framework that allows users to build a wide range of mobile apps.

To comprehend how React Native came to be such a popular product, we must first comprehend its origins.

What is React Native?

The Facebook Ads platform had been employing the traditional MVC approach to the process up to that point. The complexity of the system naturally expanded as additional functionalities was added. Even for non-technical people, it should come as no surprise that if you don't know how to use an instrument, it might become unmanageable.

Things had gotten so bad that developers were losing track of where their updates were having an impact on the application; things needed to be simplified, and they needed to be simplified quickly. In 2012, the React Framework was born as a result of this. This followed the discovery of a method for creating UI elements for iOS using JavaScript, which completely transformed the game.

The framework performed so well that it was decided to make it open to the entire community. React was open-sourced in 2013 after successfully detaching from the Facebook Stack. React Native was first published by Facebook in 2015, and it revolutionized the way we build mobile apps. Cross-platform App development tools have all the advantages of native code.

The platform went on to assist in the development of some of the world's most well-known apps. It did, however, create some reservations about its practicality for commercial use when it was first published, but the platform managed to disprove the critics.
Businesses have used the React framework in several scalable ways, from pure React to hybrid App platform development. Here are some of the features that genuinely distinguish React Native from its competitors.

Save money and time

This platform's cross-platform applications make it a huge time saver when it comes to development. Because the code is compatible with both iOS and Android, the hybrid App development company can focus on investing and establishing a united entity rather than creating separate apps. In terms of total expenditures, this may be less expensive than developing a single app. Furthermore, in terms of pure decision-making, launching the app on two platforms at the same time saves a lot of time. Furthermore, because this is a shared platform for both OSs, any updates or maintenance may be applied to both iOS and Android at the same time.

There is no performance difference between a React Native app and a native Android or iOS app. Given that they were designed primarily for mobile app trends, their performance is nearly identical. Most cross-platform hybrid solutions require the use of the system's central processor unit; React Native, on the other hand, makes use of the graphic processing unit. As a result, they are substantially speedier and a far better bet for effective and time-sensitive tasks.

According to Statista, JavaScript is one of the most widely used coding languages on the planet. It is used by over 64% of developers, with HTML/CSS coming in second. Because React-Native app development Service Company is based on JavaScript, it's a no-brainer for developers to use it. The fact that support is so readily available, as well as the platform’s tremendous adaptability due to its core language, makes it a no-brainer for hybrid mobile app testing.

React Native is a free and open-source platform with thousands of users worldwide. It is consistently recognized as Github's most popular cross-platform tool, and it was the most popular in the world in 2020. Future with hybrid Apps is easy accessibility and global contributions from developers make it an excellent support structure for your product.

Assists with the faster publication

Before React, updating an app was a time-consuming process that required developers to go back to the drawing board for different versions of the app. You can also publish any changes or corrections while the app is in use with over-the-air updates. This eliminates the need to update the app through the shops, completely automating the process and making it easier, faster, and more effective.

Better management of the project

If you're making pure native and web-based applications, you'll almost certainly need to cooperate with two independent teams working on iOS and Android features. React Native eliminates the need for two teams, allowing you to concentrate on one. This not only streamlines your app across platforms but also helps you to work with a smaller team. It's worth noting that you'll still need a skilled JavaScript developer who is familiar with both platforms. However, the team's size and scope become much more manageable.

'Hot reloading' is a feature provided by React Native. This simply means that the developer may see the changes to the program in a different window while working on it. For developers, this is a terrific feature because it saves time and provides instant feedback for approval or adjustments. It's crucial to be able to keep the program running while adding newly updated files.

For developers, React Native was a breath of new air. Its cost-effective multi-platform approach was also good in quality in terms of user experience. Over and beyond the features outlined above, the sheer adaptability and potential of reusing modules and scripts make it the ideal choice for mobile app development frameworks.