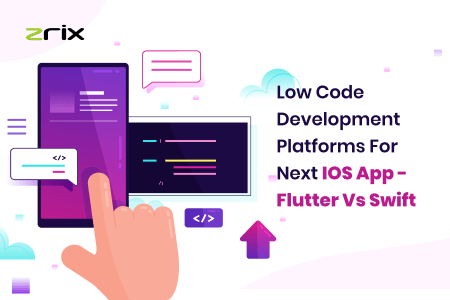 Swift is an Apple-developed programming language. Swift is powering a new class of modern server applications, as well as many new apps for Apple platforms.

Swift is the cutting-edge programming language research, as well as decades of expertise in developing Apple platforms.

Benefits of Swift for IOS development

The most compelling reason to choose Swift is probably its simple syntax, which made it much easier and write. In comparison to Objective-C, Swift requires far fewer lines of code to provide an option. Because Swift does away with several old traditions like semicolons at the end of lines and parentheses around conditional expressions inside if/else statements, this is the case. In a conclusion, the code is more readable and has a simpler syntax.

Objective-C can't grow without C developing Platform. Swift, on the other hand, it is much easier to maintain. To increase the build time and efficiency of the code, programmers in C must maintain two code files, which is also true in Objective-C. Programmers may spend more time with Swift developing app logic and enhancing the quality of their code, comments, and supported features.

Building a safe app should be a top concern in the global mobile app market. When it comes to bug testing, Swift is better and faster than Objective-C. As a result, Swift is being a safe and secure programming language.

One of the most compelling reasons for iOS app developers’ documentation to choose Swift over Objective-C is speed. Swift provides fast performance, whether during development or testing, which helps to save app development costs. It has one of the most efficient algorithm computation metrics.

Swift became an open-source low-code platform in 2015, allowing it to be utilized on several platforms and for backend infrastructure. Because Swift is open-sourced, Apple will be able to collect feedback from the community and make enhancements regularly as independent developers participate in the language's success. Swift is not popular because it is well-structured and conceived, but also because it has the support of a large number of developers.

This open-source platform is built on Google's internal programming language Dart, which allows for compilation into native Android and iOS code. As a result, Flutter application development may give unique features and meet consumers' expectations while meeting all of the criteria that have become the industry standard for mobile apps today. Flutter is not developed enough to manage more difficult operations, at least not yet. However, it's a perfect option for an MVP at the same time (especially for startups). It's a regular occurrence with all new technologies. But you have an option to hire Flutter app Developers.

Reasons to not choose “Flutter” over “Swift”

It hasn't been around for long, therefore it isn't completely stable yet. There are still several flaws that are more or less severe, as well as a lack of more complex features that take advantage of operating system capabilities. Many of these capabilities aren't available yet, as many libraries are still in pre-alpha and have limitations when compared to the native iOS interface features.

Flutter is a Google product, and the level of support for iOS apps is deteriorating. If the majority of the SDK functions on Android work as expected, there are issues with iOS. When photography on an Apple device, for example, the application deletes all EXIF data. As a result, the photo is in the wrong orientation, and it lacks a location, a date, and the proper gamma. Special iOS features (VoiceOver, Guided Access, and so on) are essentially non-existent today.

Using your widgets rather than native ones has some drawbacks. Some Android and iOS features, for example, are problematic. Autocomplete input fields are very difficult with Flutter applications. This is especially obvious if you need to use built-in or third-party password managers to extract passwords.

Limited Set of Tools and Libraries

Flutter is a brand-new cross-platform UI-toolkit platform. Numerous Flutter attributes are still in alpha or beta testing, so they may or may not work at all times. Furthermore, because the platform is still being finalized, you may not be able to find the essential functions in the existing library. It will take some time for Flutter to build the necessary tools, improve functionality, and grow the community.

Because modern customers do not want to forego their favorite song or game in favor of the next app, one of the developer's key responsibilities is to provide the smallest possible application. Programmers employ a variety of strategies to reduce code size, including avoiding animations, reducing picture size, and using the fewest packages and libraries possible.

Swift has an advantage over Flutter in terms of learning curve and approachability because, as already said, you shouldn't need to learn a new programming language to create native iOS apps. You can also hire an iOS App Development Service provider for quality app development for IOS. Flutter and Swift, on the other hand, are reasonably simple to learn because of their extensive documentation and community support.